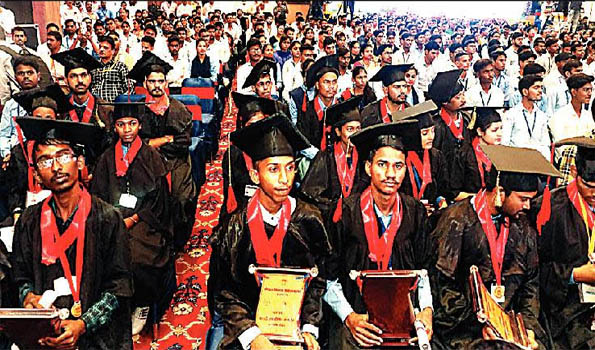 Bhopal: Chief Minister Shri Shivraj Singh Chouhan said that education has three objectives. To impart knowledge, to educate and to impart the values of citizenship. Skill is the soul of education, without it any education is incomplete. Knowledge tells us what to do and skill teaches us how to do it. Chief Minister Shri Chouhan said that if youths acquire skill, then employment will also be easily available. He said that if we have to beautify Madhya Pradesh, it will be done through skill. Youth population is the largest in our country and this will emerge as our strength. He said that if youths are only made skillful, then they can do miracles.
Chief Minister Shri Chouhan was addressing the State Level ITI Convocation of Technical Education, Skill Development and Employment Department at Kushabhau Thakre Auditorium today. He said that till now we have seen convocations on completion of graduation in colleges and universities, but today Madhya Pradesh is probably the first state in the country where convocation is being held on completion of courses of ITI students.

New trades are also being started
CM Chouhan said that new trades are also being started in the institutions of the state. At the divisional level, work has been started for all ITIs to operate in well-equipped buildings. No stone will be left unturned to start the required trade, including Artificial Intelligence, as per the requirements of the modern times. Necessary technical education is also being arranged accordingly to ensure that children get more and more work. The Chief Minister said that the Minister for Technical Education and Skill Development Smt. Yashodhara Raje Scindia and the officers of the department deserve congratulations for the convocation.

Rural engineer scheme
Chief Minister Shri Shivraj Singh Chouhan launched the 'Gramin Engineer Yojana' (Rural Engineer Scheme) under the Sankalp Yojana of the Central Government by pressing the remote button at the state level ITI convocation. CM Shri Chouhan said that by posting rural engineers in every panchayat, such engineers would play a role in the maintenance of water supply lines, repair of water supply lines, guidance for the houses of Pradhan Mantri Awas Yojana and other works. He said that we will work on the vision of rural engineer. There will be at least 4 rural engineers in every gram panchayat, who will contribute to the facilities like electricity, water, construction works etc.