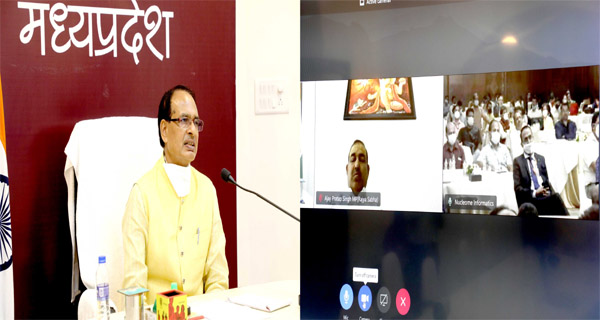 Chronicle Reporter, Bhopal
Chief Minister Shri Shivraj Singh Chouhan has said that in order to double the income of the farmers, it is necessary to connect the latest discoveries and developing technology in the field of agricultural science with the farmer's field. Agri genomics is such a scientific field, which can ensure high yield, insect resistance and crop quality. Shri Nandkumar Singh Chouhan (NKC) Center for Genomics Research will prove to be a milestone in providing updated scientific information to the farmers.
Chouhan was virtually inaugurating the center set up by Nucleom Informatics in Hyderabad from the Chief Minister's residence. Union Defense Minister Shri Rajnath Singh, Member of Parliament Shri Ajay Pratap Singh and Shri Rajendra Gehlot, Principal Scientific Advisor to Government of India Prof. K. Vijayaraghavan, Union Animal Husbandry Secretary Shri Atul Chaturvedi also participated in the program.

Agri Genomics will be helpful in soybean crop improvement: Chouhan said that soybean crop in the state is continuously getting spoiled. Farmers are greatly affected by this. Soybean crop improvement experiments can be done using agri genomics. This will benefit the farmers of the state.
It is noteworthy that Agri Genomics is a scientific field, which is contributing to crop improvement. Due to this, more production of better quality crops is possible by improving the pest resistance in the crop, stress tolerance of plants. Nucleome Informatics started its journey in this field in 2013. The work of genome sequencing of animals is also being done by the organization.