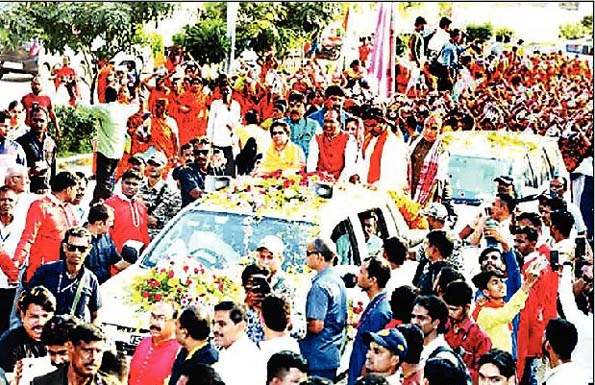 Bhopal: Chief Minister Shri Shivraj Singh Chouhan on Tuesday attended the "Gaurav Diwas" programme and the grand Chunri Yatra taken out in Dewas city. Chunri Yatra was accorded a grand welcome at various places. The city of Dewas appeared full of devotion during the yatra. CM Shri Chouhan dedicated, performed bhoomi-poojan and laid the foundation stone of development works costing more than Rs. 350 crore in the "Gaurav Diwas" programme held in Kushabhau Thakre Stadium Complex. Chief Minister Shri Chouhan released Maa Chamunda Mahatmya booklet, Dewas Vikas Gatha booklet and also launched the concept video of Constitution Park and Dewas song.
CM Chouhan said that Dewas means abode of goddesses, there is infinite grace of Mata here. The "Gaurav Diwas" of Dewas being celebrated in Navratri is welcome. Dewas will be among the major cities of the country in the coming 10 years. Very few cities have developed like the city of Dewas. No shortfall of development will be allowed here. The people of Dewas will have to work shoulder to shoulder with the government. Tree plantation should be done to protect the environment. Water has to be saved, children's health, education along with all round development will have to be done. The wheel of development should not stop. Let everyone be determined for this.
Minister in charge of Dewas district Smt. Yashodhara Raje Scindia said that today we all are celebrating "Gaurav Diwas" of Dewas. Development works are going on rapidly in Dewas. Dewas is soon going to be the new Indore. Dewas will become the pride of the state. MP Shri Mahendra Singh Solanki said that Dewas is the tapobhoomi of many great yogis. Together we will do development work for Dewas. MLA Smt. Gayatri Raje Pawar said that many development works are being done in Dewas. We have made a vision of 5 years for the development of Dewas. 80 percent vision of development works has been completed. In the coming time, cent percent work will be completed.