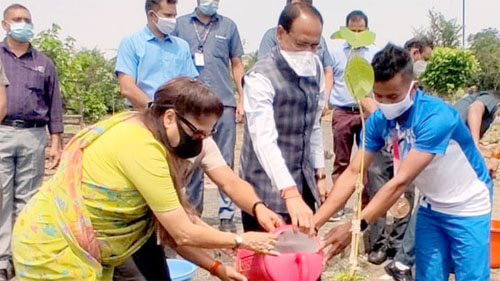 Chief Minister Shri Shivraj Singh Chouhan said that the State Government would leave no stone unturned for the development of hockey. State will extend every possible cooperation to encourage hockey players. Shri Vivek Sagar is a resident of Chandon Pipariya village of Hoshangabad district of Madhya Pradesh. His family lives in Itarsi, he played an important role in the victory of the Indian hockey team with his hard work. Chief Minister Shri Chouhan said that India got bronze medal in Tokyo Olympics. It is not just a medal but reawakening of hockey. Shri Vivek Sagar's age is only 21 years now. Surely he will win a gold medal one day too. Many congratulations and best wishes to him.

Chief Minister Shri Chouhan said that the Sports Department has done wonderful and exemplary work for the development of other sports including hockey. The work of upliftment of sports will continue. Chief Minister Shri Chouhan said that women hockey players would also be encouraged. The Indian women's hockey team has earned the fourth position in the Tokyo Olympics 2020. It is a matter of great honour. Rs 31 lakh will be given to each player of the Indian women's hockey team.