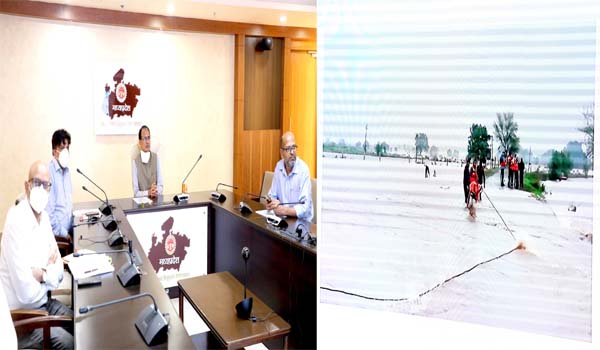 Bhopal: Chief Minister Shri Shivraj Singh Chouhan has asked to make arrangements to airlift the people trapped in the floods in Kuno and Parvati rivers in Sheopur and Shivpuri districts, after discussing immediately with the Air Force. In view of the possibility of rain in Gwalior, Chambal division in the next 48 hours, villagers should be asked to leave the villages immediately. Chief Minister Shri Chouhan was reviewing the flood situation in the state at Mantralaya.
It was informed in the meeting that villages of Sheopur and Shivpuri districts have been affected due to floods in Kuno and Parvati rivers. The district administration, S.D.R.F. are engaged in relief and rescue operations. N.D.R.F. teams are also reaching the flood-hit areas. Chief Minister Shri Chouhan inquired about the rainfall and the condition of dams in other parts of the state.

It is noteworthy that 6 villages Kupwara, Harrai, Akurni, Barkhedi, Chilapai and Raipur of Bairad tehsil of Shivpuri district are surrounded by the flood waters of Parvati river. Of these, villagers from Kupwara, Harrai and Akurni villages have been shifted to safer places. Villagers in Barkhedi, Chilapai and Raipur are surrounded by flood waters.
Chouhan spoke to the S.D.M., station in-charge, local sarpanch, panchayat secretary and Anganwadi workers on mobile from the Situation Room and inquired about the situation. Chouhan said that the villagers should be safely transported to a higher place in the village itself so that the villagers are not affected by the flood waters. Chief Minister Shri Chouhan encouraging the villagers said that all possible relief efforts are being made. As soon as the helicopters reach, the work of shifting the villagers to a safe place will start. He urged the villagers not to worry the safety of all the people is the top priority of the state government.