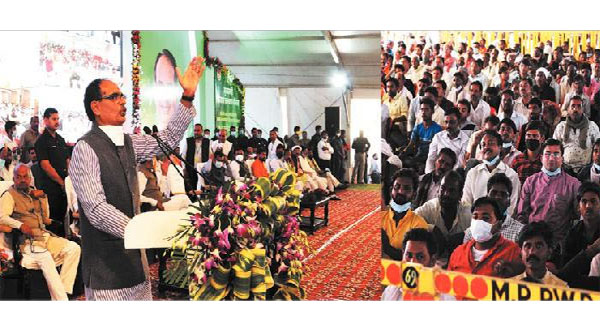 Chronicle Reporter, Bhopal-Chief Minister Shivraj Singh Chouhan transferred Rs 400 crore into the accounts of 20 lakh farmers of the state through single click under the Mukhya Mantri Kisan Kalyan Yojana. In a state-level programme organized at Damoh district headquarters, Chief Minister Chouhan said that we will make Aatma-nirbhar Madhya Pradesh. We will not let Madhya Pradesh lag behind in development. Our government is a government that works for farmers, poor and women.  From the Corona period till now, we have deposited crores of rupees to the accounts of farmers under various schemes. In the coming 15 days, we will also transfer relief of Rs 1500 crore to the accounts of affected farmers as relief amount of crops that were damaged last year.
Chief Minister Chouhan said that the state government is working for the progress and prosperity of the farmers of the state. He said that even during the Corona period, we have purchased every grain of wheat and gram from the farmers of the state. We will buy this year too. Registration period will be extended for those farmers whose registration has not been done in Damoh district till now. Union Minister of State for Culture and Tourism (Independent Charge) Prahlad Patel, Khajuraho MP V.D. Sharma, Madhya Pradesh Warehousing and Logistics Corporation President Rahul Singh and former Minister Jayant Malaiya also addressed the programme.

CM interacts with farmers
Chief Minister Shivraj Singh Chouhan also interacted with farmers of Satna, Dewas, Shivpuri, Shajapur and Seoni districts in a state-level programme organized under Mukhya Mantri Kisan-Kalyan Yojana. He took feedback of the scheme from the farmers. He also heard their problems and instructed the officials concerned to solve them.
Gifts development works worth Rs 482 crore to Damoh
Chief Minister Chouhan gifted development works worth crores of rupees to Damoh district. He also performed bhoomi pujan and dedicates works costing more than Rs 482 crore in the state level programme. This includes the bhoomi pujan of a medical college to be built at a cost of Rs 325 crore.
Industries will be established by exploiting Damoh,s mineral resources
Chief Minister Chouhan said that there will be all-round development of Damoh. We will also set up small, medium and big industries to exploit the available mineral resources in Damoh district, so that the local youth can get maximum employment. He also gave information about the works being done for irrigation in Damoh district. Chief Minister Chouhan instructed to speed up the process of completion of the ongoing drinking water scheme for Damoh city. He said that all important development works will be udnertaken for the all-round development of Damoh.
Water of Ken-Betwa will reach the land of Bundelkhand
Chief Minister Chouhan informed that the long-standing Ken-Betwa dispute has been solved. We will soon meet the Prime Minister to discuss this matter and will esure that the water of these rivers reaches Bundelkhand. Chief Minister Chouhan announced to provide tap water in every house in 446 villages of Damoh.
Those who mess with the ration of the poor will be jailed
Chief Minister Chouhan said that eligibility slips should be issued to every eligible beneficiary of the district. No poor should be left out of it. This is the responsibility of the collector. It must be ensured that the eligible beneficiaries whose eligibility slips have been made, should also get ration. The Chief Minister said that strict legal action should be taken against those who mess with the ration of the poor. He said that such people should be handcuffed and sent to jail. Those involved in any irregularity in this connection should not be spared.
Women will be empowered financially
Chief Minister Chouhan said that strong steps are being taken for empowerment of women. An amount of Rs 150 crore is being sent to the accounts of different self-help groups every month. Now women of SHGs will also make uniforms. It is our aim to increase their income. The officers should also ensure that only women of the group make the uniforms and no contractors can interferes in their work.
FIR is not enough, the property must be confiscated and amount given to the affected
Chief Minister Chouhan said that strict action should be taken against the chit fund companies engaged in illegal money collection by luring people. He said that we have so far auctioned the assets of many such companies and paid crores of rupees to the affected people. Chief Minister Chouhan said that you should not worry, we will not spare such fraudsters. No mafia will be spared in Madhya Pradesh, this is my resolve. In Damoh too, instructions were given to the Collector and Superintendent of Police to take action against such chit fund companies.
Sambal - strength of the poor
Chief Minister Chouhan said that our poor brothren have the first right over the state exchequer. We have resumed the Sambal scheme which is the strength and support of the poor, under which the eligible people will get benefits of various schemes.
Ayushman cards of each eligible person must be made
Chief Minister Chouhan sought information about the Ayushman cards made under Ayushman Bharat Yojana from the district collector. He said that every eligible poor should possess the Ayushman card. No eligible poor should be deprived of it. We have made 2 crore Ayushman cards so far. Through this card, the eligible persons can avail treatment for up to Rs 5 lakh in selected private hospitals.
Mafiagiri will not work
Chief Minister Chouhan said that a campaign has been launched to take action against all types of mafia in the state. Mafiagiri will not work. Action will be taken against those who engage in wrong doings. The Chief Minister issued instructions to the officers to continue the proceedings against the mafia in a sustained manner.
Benefits distributed to beneficiaries
Chief Minister Chouhan distributed benefits to the beneficiaries of various schemes. Public Works Minister Gopal Bhargav, Urban Administration Minister Bhupendra Singh, Chairperson of Civil Supplies Corporation Pradyuman Singh, MLAs P.L. Tantuvai, Dharmendra Singh Lodhi, Smt. Rambai Singh Parihar, District Panchayat President Shivcharan Patel, former Minister Dr. Ramakrishna Kusmaria, former MP Chandrabhan Singh and public representatives were present on the occasion.