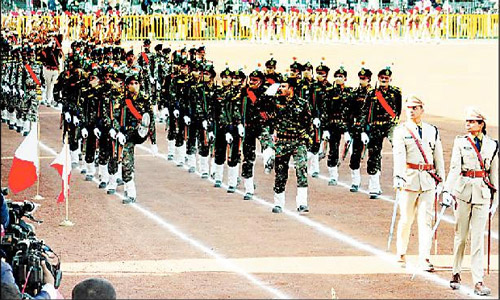 Chief Minister Shri Shivraj Singh Chouhan took the salute of the grand parade by hoisting the flag at Nehru Stadium in Indore on Republic Day. Congratulating the people of the state, CM said in his message that we are celebrating the Amrit Mahotsav of freedom. Today is a wonderful and unforgettable confluence of Amrit Mahotsav and Republic Day. We have celebrated the 125th birthday of Netaji Subhas Chandra Bose on 23rd January in the country. Prime Minister Shri Narendra Modi has decided to celebrate Netaji's birthday as Parakram Diwas. On the occasion of Republic Day, I bow and offer respect at the feet of Netaji.
Chouhan said that the British had not offered independence to the country by keeping it in a silver plate. On one hand there was a non-violent movement under the leadership of Pujya Bapu ji, on the other hand the revolutionaries had coloured the holy soil of Mother India with the last drop of their blood. The country became independent due to their sacrifice, penance and contribution. The Chief Minister said that it sometimes hurts to say that after independence we were even taught the wrong history of independence. The country was told that India was given independence by Mahatma Gandhi, Nehru ji, Indira ji. I do not reject the contribution of Bapuji, Bapuji is Vishwabandhu. The revolutionary stream of freedom was forgotten, the memory of not one but many immortal martyr revolutionaries was not preserved.