CM yeddiyurappa's exist will not change anything in K'taka, claims Siddaramaiah 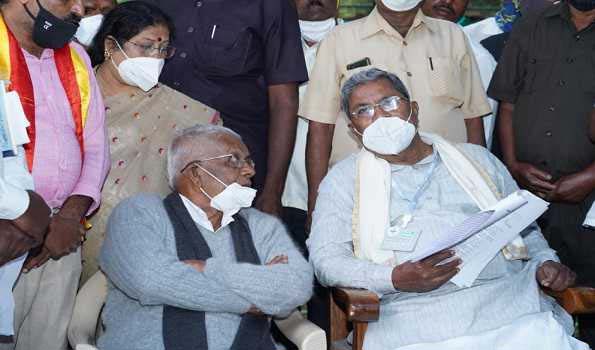 Bengaluru, Jul 22 (UNI) Former Chief Minister and Leader of the Opposition Siddaramaiah on Thursday said the new government that will come after Chief Minister B S Yediyurappa’s exit will not change anything because “the BJP itself is a corrupt party”.

Speaking to reporters at Vidhana Soudha after chairing a meeting of the Congress’ legislators, he said that Yediyurappa gave a bad government in Karnataka. It was not a pro-development government. It was a government filled with corruption,” he said. “By removing Yediyurappa, I don’t think an honest chief minister will come. The BJP itself is a corrupt party. Their ministers are corrupt. So whoever comes, it will be a corrupt government,” he said.

He recalled that he had predicted Yediyurappa’s exit several months ago. “I've been saying for 6-7 months that Yediyurappa will be changed. I had credible information. Nobody believed me, but it has come true now,” he said, adding that this was the BJP’s internal affair.