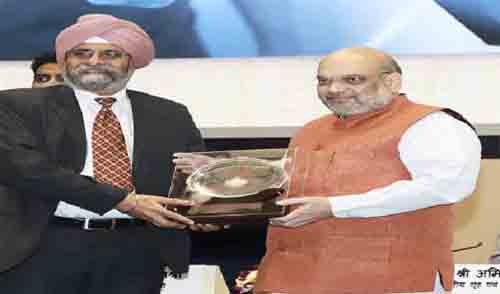 The Rajbhasha Kirti Puraskar, consisting of Rajbhasha Kirti Shield, was presented on Tuesday on the occasion of “Hindi Diwas” at a glittering ceremony held at Vigyan Bhavan, New Delhi, a release here said.

The TOLIC, Hyderabad, under the Chairmanship of CMD, BDL has been bestowed with the Rajbhasha Award at National Level for the fourth time for the best implementation of Official Language among member organizations comprising the Public Sector Undertakings located in Hyderabad and Secunderabad.

Speaking on the occasion Cmde Siddharth Mishra stated that Hindi plays a vital role in the progress of our nation. The member organizations of TOLIC, Hyderabad have been working relentlessly for effective implementation of Official Language in their respective organizations and urged them to continue their efforts in future also.

The Home Minister also presented a certificate of Merit to Dy. General Manager (HR-OL) and Member Secretary, TOLIC Shri Homnidhi Sharma for his appreciable contribution as part of Rajbhasha Kirti Puraskar for the year 2019-20.