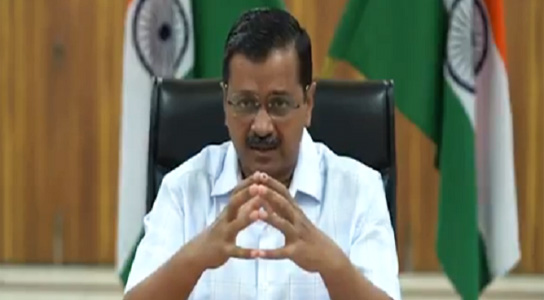 The Delhi government has announced an honorary compensation of Rs one crore to the kin of doctors, nurses, paramedical staff, sanitation workers engaged in the treatment and service of patients suffering from coronavirus, in case of any casualty while dealing with Corona patients.

Announcing this, while addressing a digital press conference here, Mr Kejriwal said, 'Our healthcare staff is no less than a soldier who fights on the border of the country. Just as the honorary compensation has been announced for martyred soldiers, the Delhi government will also give an honorary compensation of one crore rupees to the family of the doctors, nurses and other staff who is involved in the treatment. The honour will be given to the families of the employees of both private and government hospitals.'
He said that the emotional pictures and videos of the doctors and their families are going viral on social media.

Mr Kejriwal said, "Doctors, nurses, paramedic staff and cleaning staff, and all those involved in the treatment of COVID-19 patients, I want to thank all of you for serving the people in these times of distress. I do not think a disease, a pandemic of this stature has ever hit mankind.

'The most developed nations of the world, like the USA, the UK, Italy, Spain, and Germany, have been struggling with COVID-19. Despite having the most developed health nations, these nations are not able to cope up with the pandemic."

He said, "This is a new virus, and no vaccine and cure has been discovered until now to treat COVID-19. Since the virus entered a month later in India, we have the opportunity to learn from the other nations.

'I believe India is still on stage 2 of the local transmission and has not reached stage 3 of community transmission. We have positive cases of international travels, and a few cases from Markaz yesterday.

'The government is trying to cease the community spreading of COVID-19. The number of positive cases is less, but the suspects and quarantine are more. If the positive cases increase, the doctors, nurses, and staff have to be more proactive in providing the treatment."

"I take daily reports of all those working in the paramedic staff team, who are directly and indirectly engaged in the COVID-19 treatment. I want to thank you on behalf of the people of Delhi and the nation. A doctor is considered as an equal to God. Doctors are working on the frontline to deal with this pandemic, they are also putting their lives at risk," Mr Kejriwal said.

He said, "I saw a picture and a video on social media yesterday. The picture depicted a doctor reaching home at the end of the day after treating the patients, and he is standing outside his gate and has not entered his home to meet his wife and his children. Another doctor in the video also did not meet his child after coming back home at the end of the day. All of these are heartbreaking instances, people can gauge how doctors are working in such difficult circumstances."

'I am personally pursuing the supply of sufficient PPE for the doctors. I am in touch with suppliers, manufacturers. I have also requested industrialists to donate PPEs for the doctors, instead of the donation in the CM relief fund," Mr Kejriwal said.

He said, "Just like a soldier fights on the borders, you all are also fighting to save the lives of the people. You are also fighting a battle against a Corona. The situation is under control right now, there are fewer numbers of deaths and positive cases in Delhi.

'You can directly reach out to me in case you have any queries or difficulties, please consider me your family member.

'We are in this together. I believe that even if we are in a helpless situation, there is nothing so big that we cannot tackle together."