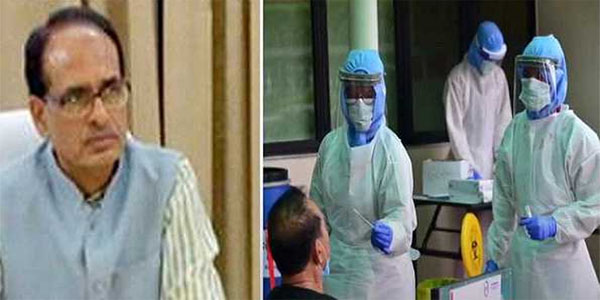 Madhya Pradesh Chief Minister Shivraj Singh Chouhan on Saturday became the latest addition to the long list of elite politicians, academicians and celebrities, who became victims of Novel Coronavirus, while the country registered one of the lowest fatality rates in the world at 2.35 per cent.

Confirming the development through a message, Mr Chouhan said, 'I urge one and all to exercise every precaution for safeguarding themselves against the contagion.'

Meanwhile, as per the Health Ministry, the country registered a massive spike of 48,916 COVID-19 cases, while 757 people succumbed to the fatal virus, during the past 24 hours.

An official statement said that India has one of the lowest fatality rates in the world, which significantly dipped to 2.35 per cent.

With effective and standardised clinical management protocols based on holistic Standard of Care approach, the Case Fatality Rate continued on its downward trend, due to the collective efforts of the Centre and the state/UT governments, to keep a check on the mortality rate due to COVID-19.

With this, the Tests Per Million (TPM) has further increased to 11,485 and cumulative testing to 1,58,49,068. Both continue to maintain an upward trend.

A total of 32,223 COVID patients have recovered in the past 24 hours. The cumulative number of recovered cases reached 8,49,431 on Saturday. The recovery rate has achieved another high of 63.54 per cent. The gap between recovered patients and active COVID-19 cases has further increased to 3,93,360.

To enhance the health infrastructure of the National Capital, Delhi Chief Minister Arvind Kejriwal inaugurated a 450-bedded Burari Hospital in Delhi via video-conferencing. The newly-set up Burari hospital will have a total of 700 beds, out of which 450 have been installed.

Around 125 beds will have oxygen supply available with them, and the capacity will be enhanced in the coming days.