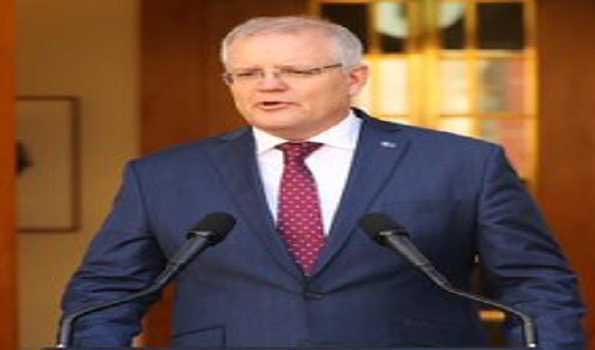 Canberra,  Australian Prime Minister Scott Morrison addressed the nation and urged for calm, assuring that government was well-prepared to deal with the coronavirus pandemic.Morrison on Thursday night became the first prime minister to deliver a televised national address since former Prime Minister Kevin Rudd did so during the Global Financial Crisis (GFC) in 2008, The Australian reported.'I want to assure you and your family tonight that while Australia cannot and is not immune from this virus, we are well prepared and are well equipped to deal with it,' he said."And we do have a clear plan to see Australia through," he added.He outlined the plan in three goals: protecting Australians' health, securing Australians' jobs and livelihoods and setting Australia up to bounce back stronger when the crisis is over.

The government has announced a 2.4 billion Australian dollars (1.5 billion US dollars) medical response to the virus."The months ahead will present many challenges, and we will respond to them. We will continue to keep you updated and take decisions based on the best possible medical advice," Morrison said.Parts of the economic stimulus package will require legislation that the government intends to introduce when Parliament resumes on March 23.The Opposition Labor Party has signalled support for such legislation, with leader Anthony Albanese on Friday calling for Parliament to be reconvened earlier so it can be rushed through. "Labor will expedite any passage of legislation through both houses of parliament," he told reporters.