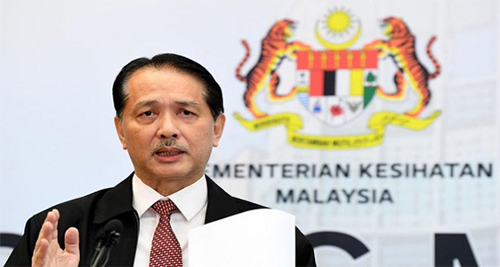 The Novel Coronavirus has so far claimed 23 lives in Malaysia, while infecting 2301 people, with 235 new cases confirmed on Thursday, the country's largest one-day increase so far.

According to Malaysia Health Ministry Director-General Noor Hisham Abdullah, at least 60 new cases were traced to a largescale religious event, held near this state capital from late February to early March.

The number of cases in the country has spiked following the event, Mr Abdullah pointed out.

Addressing a press conference here, Mr Abdullah said out of the total cases, 215 have been cured and discharged from hospitals, while 45 are currently being held in intensive care and 32 of those are in need of assisted breathing.

Stating that 80 public healthcare workers, including 39 from one single hospital had tested positive, Mr Abdullah said these were, however, from exposure outside of their work and reminded the public to comply with the conditions imposed by the authorities.

Malaysia has implemented a 'movement control order' since March 18, by closing shops and schools as well as imposing travel bans till April 14. It called for residents to stay at home, in an effort to contain the COVID-19 outbreak.

However, both Mr Abdullah and Ms Azizah had themselves tested negative for the virus, Comptroller of the Royal Household Ahmad Fadil Shamsuddin said in a statement.

"While approving of the government's extension of the movement control order to April 14, he (the king) also expressed hope that all Malaysians will be firm in facing this difficult time and continue their support and cooperation to healthcare workers and security personnel," he said.

Malaysia has implemented the "movement control order" since March 18, including closing shops and schools as well as imposing travel bans. It called for residents to stay at home in an effort to contain the COVID-19 outbreak.

Earlier, former Malaysian Prime Minister Mahathir Mohamad said via social media that he had been observing a 14-day quarantine, after coming in contact with a Member of Parliament, who later tested positive for the disease.

Local media reports said that the 94-year-old former prime minister had been cleared by the Health authorities after testing negative.