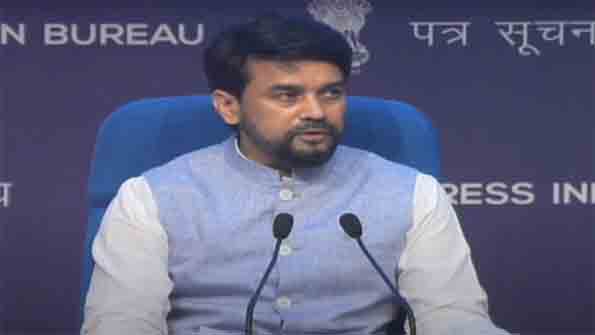 The bill to scrap the farm laws would now be introduced in the winter session of the Parliament that commences on November 29.

The laws which would be scrapped are the Farmers' Produce Trade and Commerce (Promotion and Facilitation) Act, 2020, the Farmers (Empowerment and Protection) Agreement of Price Assurance, Farm Services Act, 2020, and the Essential Commodities (Amendment) Act, 2020.

"On 19th of November, on the day of Gurupurab, Hon'ble Prime Minister had announced that the government will repeal the three farm laws and today when the Cabinet met under the able leadership of Prime Minister Narendra Modi we have completed the formalities to repeal the farm laws," Union Information and Broadcasting Minister Anurag Thakur said in a media briefing after Cabinet meeting.

The foodgrains distributed under the Phase V of the scheme would entail an estimated food subsidy of Rs 53,344.52 crore.

Stating that in the last 20 months poor and middle class families have suffered due to Covid-19 pandemic, Thakur said that government not only announced but has helped each poor and needy by providing free foodgrains.

Under the scheme, about 80 crore National Food Security Act (NFSA) beneficiaries covered under Antyodaya Anna Yojana and Priority Households are being provided with an additional quota of free-of-cost foodgrains (rice or wheat) at a scale of 5 kg per person per month over and above their regular monthly entitlements.

The Centre had in March 2020 announced PMGKAY to ameliorate the hardship faced by the poor due to economic disruption caused by Corona virus.

The scheme is estimated to cost 2.60 lakh crore during 19 months of being in operation.

“As I said earlier more than 600 lakh metric tonne (MT) of foodgrain has been sanctioned and 541 lakh MT has been disbursed already and distributed. We still feel as economy gets back on the track, the figures are looking much better, Prime Minister wants to help those poor families who have gone through this Covid 19 pandemic. So for the next four months they should be helped and foodgrains should be given to them,” he said.

“India is the only country perhaps in the world where for the poor and the destitute this kind of scheme to make foodgrains available was not only announced but being taken to every needy,” he added.