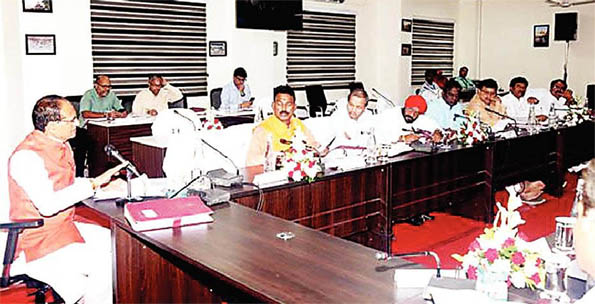 Chronicle Reporter, Bhopal
Under the chairmanship of Chief Minister Shri Shivraj Singh Chouhan, a meeting of the Council of Ministers was held in the administrative complex of Ujjain today. The Cabinet accorded administrative approval to 23 new group water supply schemes and one revised group water supply scheme proposed by Madhya Pradesh Jal Nigam Limited for implementation of Jal Jeevan Mission. The total cost of the above 23 new schemes is Rs. 17 thousand 971 crore 95 lakh.

Amendment in Udyam Kranti Yojana
To make Mukhya Mantri Udyam Kranti Yojana more effective and comprehensive, the Cabinet decided to reduce the minimum project limit from one lakh to 50 thousand rupees. Under the scheme, now interest subsidy will be paid to the beneficiary on quarterly basis instead of annual. Projects will be accepted in the scheme even if the manufacturing unit is more than Rs 50 lakh or the service / retail business unit is more than Rs 25 lakh, in which in the event of approval of the case by the bank, the benefit of 3 percent interest subsidy received by the beneficiary on a maximum of 50 lakhs or 25 lakhs of loan amount and reimbursement of loan guarantee fee should also be done on pro-rata basis. The entire loan given by the bank should be collateral free.
The age limit for eligibility and financial assistance under Mukhya Mantri Udyam Kranti Yojna was originally kept at 18 to 40 years, which has now been amended and the order to make it from 18 years to 45 years has been approved.

Maheshwar Hydroelectric Project
The Cabinet approved the decisions received from the Chief Minister in coordination regarding the 10x40 Megawatt Maheshwar Hydroelectric Project, District Khargone.
It was decided to cancel the power purchase agreements executed by the then Madhya Pradesh Electricity Board (currently MPPMCL) with M/s Shree Maheshwar Hydel Power Corporation Limited (SMHPCL) on 11 November 1994 and 27 May 1996 respectively for purchase of power from Maheshwar Hydro Electric Project, Mandleshwar, District Khargone and the amendment of this contract.
.
Creation of posts for Family Courts
In view of the increasing number of cases in the family courts of the state, the Cabinet decided to increase the number of presiding officers and staff for family courts as per the proposal received from the High Court. According to the decision, approval was given to create 55 posts of presiding officer and staff for five additional family courts, one in Bhopal, one in Gwalior, two in Indore and one in Jabalpur.