Cancelling tickets of BJP candidates is a farce 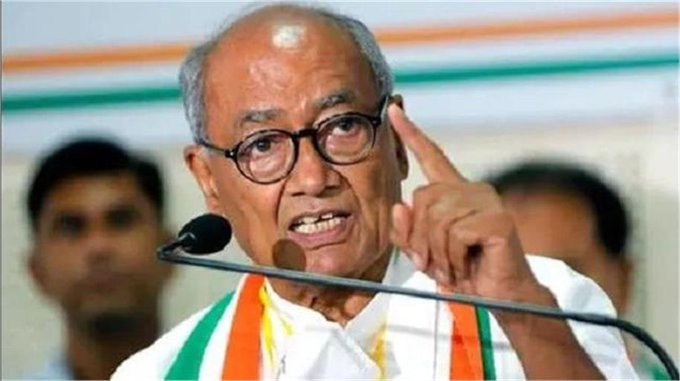 Chronicle Reporter, Bhopal
Former Chief Minister and Rajya Sabha MP Digvijay Singh has fiercely retaliated and the action of cancelling the ticket of a councilor candidate with criminal background from ward no. 12 of Panna district by Bharatiya Janata Party (BJP) is just a farce.
He said that for the last 2-3 days, BJP State President VD Sharma and Chief Minister Shivraj Singh Chouhan are trying to tell the public that habitual criminals have no place in the BJP, while the candidate from Ward 12 of Panna Municipality, Kirti Trivedi is the wife of BJP's District Vice President Ankur Trivedi. This is the same district from where BJP state president, VD Sharma himself is an MP. There are dozens of cases registered against Ankur, while Avdhesh Trivedi alias Khunna Maharaj, father of Ankur Trivedi, has many cases registered in the Kotwali and Madla police station areas of Panna, the number of such cases has been mentioned above 50. A serious case like the National Security Act (HRS) is also registered against Khunna Maharaj.
BJP seems unable to cut Kirti Trivedi's ticket due to the influence of BJP state president VD Sharma. He said that in the same case Divya Rani Singh, former president of Panna district, shared the already viral PDF file of VD Sharma's statement on social media, the case registered against Ankur Trivedi and Khoonna Maharaj regarding the double standards of BJP. Angered by this, BJP councilor candidate of Ward 12 Kirti Trivedi filed a complaint against Divya Rani Singh. In which the PDF of the case against Khunna Maharaj has been made viral, point no. The section shown in 17 is not applicable to them and the information is misleading and untrue. Shri Singh said that in this way Kirti Trivedi has agreed in a way on all the cases registered against her husband Ankur Trivedi and father-in-law Khunna Maharaj except point no. 17 and in this viral list of 10 cases on Khunna Maharaj, the serious case of NSA is also mentioned.