Canteen could not be maintained even in one year in MLB 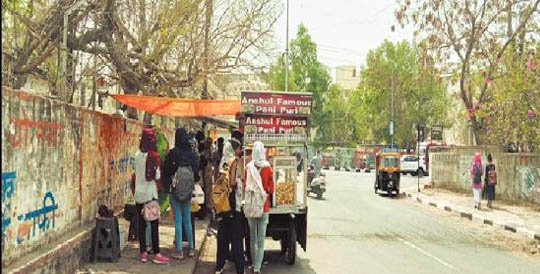 Girls forced to go out for breakfast in scorching heat
Chronicle Reporter, Bhopal
The girl students studying in the Government Maharani Laxmibai Girls College (MLB) of the capital Bhopal have to go out to have even a cup of tea in this scorching heat whereas the canteen is located inside the college, but it is not operational. The college management argues that improvement work is being done in the canteen. Whereas more than a year has passed since the reform work started. Now the question is arising that how much more time will it take to provide canteen facilities to the girl students.
According to the information received from the sources, the tender for the canteen has not been made in the college for the last five years, every time the deadline of the old company is extended with the connivance of the officials.
Hunger is satiated with Paani Puri – There is no market around MLB College. Canteen is not operational. If the girl students want to have some food and drink, they have to satiate their hunger by eating Paani Puri of a handcart stalled in front of the college.
Tea reaches for officers inside
According to the information received, only the girl students are facing problems due to the closure of the canteen of the college. The workers of the company operating the canteen deliver the tea and snacks to the college officials. This is the reason that whoever becomes the principal in the college extends the tenure of the company.
Professors come after 12
The professors working in the Government Maharani Laxmibai Girls College taking advantage, most of the professors do not reach the college on time and also leave before time. In fact, these days new principal Mamta Shansoria has been appointed in the college, the principal claims to improve the arrangements of the college, but even the professors of the college do not listen to them.
Canteen is being repaired, there was some leakage, so it is taking time. The canteen will be started in 15 to 20 days. The tender for the operations of the canteen will be issued afresh in the month of June.
-Mamta Shansoria,
Principal, MLB