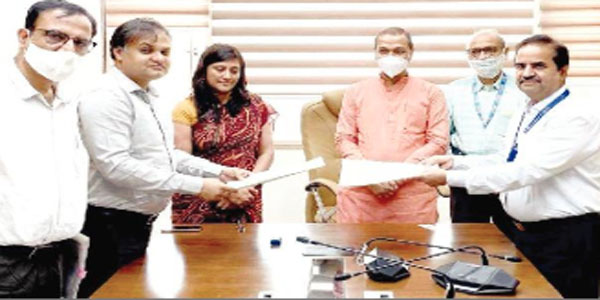 The Department has signed an MoU with Central Bank of India as the only nodal bank at the state level for claim settlement of margin money grant, interest grant and CGTMSE fee grant of the beneficiaries by various bank branches in the self-employment schemes of the state government. Minister of Micro, Small and Medium Enterprises Shri Om Prakash Sakhalecha was present on the occasion.

During the meeting held in the Ministry, Minister Shri Sakhalecha directed that cases of MSME (Micro, Small, Medium Entrepreneur) loans should be resolved by banks within the time-limit. He also asked to cover the loans of MSMEs under CGTMSE scheme of the Government of India and not take collateral security from the applicant. Shri Sakhalecha emphasized that due to under-financing by banks in cases of MSME loans, projects are more likely to have NPAs. Therefore, it is expected from the State-level Bankers Committee to take necessary steps to stop this under-financing.

Minister Mr. Sakhalecha said that the Government of India has given instructions to give benefit of 3 to 6 months of the moratorium for relief to MSMEs due to Kovid19 epidemic, but due to lack of awareness, many MSMEs are not able to take advantage of it. Huh. He emphasized that wide publicity should be done to make the MSME borrowers aware.

Minister Shri Sakhalecha has also instructed to collect district wise NPA information of the defaulters who took the MSME loan, in which the reason for the account being NPA should be recorded, so that after studying it, a relief package or plan for these defaulters is prepared Can go It is noteworthy that Minister Shri Sakhalecha will visit Dewas and Pithampur Industrial Area on July 22 with departmental officials. Also, to know the suggestions and problems of industry associations, a meeting will be held in Dewas and Pithampur.