Cases of dengue, viral, meningitis among children rising in Gwalior 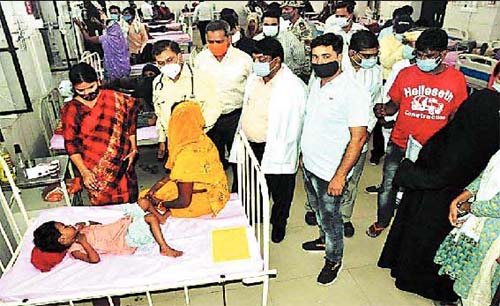 85 hospitalized; 2 succumb, 12 serious
Gwalior: In the biggest hospital of Gwalior-Chambal zone, two children have died due to encephalitis in the last 24 hours. After dengue, viral, now meningitis is spreading rapidly among children. This meningitis (pyogenic meningitis) is slowly becoming fatal. The situation is that three to four children have been admitted to one bed. 85 children are admitted on 36 beds. Most are suffering from viral, dengue, brain fever. Of these, the condition of 12 children is more serious.
The doctors of Kamalaraja Hospital (KRH) of Jayarogya Medical College (JAH) are constantly engaged in the treatment of children, but the situation is becoming uncontrollable. A day earlier, Congress MLA Praveen Pathak also inspected KRH. In this, he had expressed displeasure after seeing 3-4 children on one bed.
After dengue and viral in Gwalior, now children suffering from brain fever are also being found. Doctors tried a lot to save Altmas, a 5-year-old child who came from Pichore a few days ago, but could not save him. He died on Monday afternoon. He had cardiopulmonary resuscitation (CPR) and meningitis (pyogenic meningitis), which led to his death. Another child has also succumbed to encephalitis. KRH has confirmed the deaths of the children. These children were recently admitted.
Patients come from nearby 25 cities: Patients come from more than 25 cities of MP, UP and Rajasthan in JAH and KRH. This is the reason why the system here is severely strained. Most of the patients come from Jhansi, Lalitpur, Etawah, Mainpuri, Jalaun, Oraiya etc. of Uttar Pradesh.