Centre committed to ushering in a new era of progress in Bihar : PM 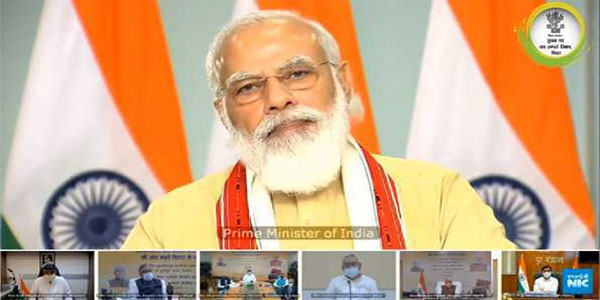 Patna, (UNI) Prime Minister Narendra Modi today reiterated that the Centre is committed to ushering in a new era of progress in Bihar.

Dedicating to the nation two new LPG cooking gas bottling plants at Champaran and Banka in Bihar along with the Durgapur-Banka section of the Paradip-Haldia-Durgapur LPG pipeline through a video link, Mr Modi mentioned that the PM package given for Bihar included ten major projects related to petroleum and gas and about Rs. 21,000 crore was to be spent on these projects.

He also shared that the work on seven such projects has already been completed.

The Prime Minister said the infrastructural development has been one of the key focus areas in the PM’s Bihar Package.

“I had laid the foundation stone for this project less than 1.5 years back. I am told that the completion of this stretch of the pipeline was extremely challenging as this pipeline navigates 10 major rivers, approximately 10 km stretch of the forest, and very hostile, rocky, and undulating terrain."

"This is indeed a salute to the innovative engineering practices as well as active support of the State and Central Governments that this project has come through in time and will immensely benefit the citizens," the Prime Minister stated.

He also mentioned that several infrastructure projects in the petroleum sector in Bihar, including the Rs. 14,810 crore project for expansion of Barauni refinery
capacity, is in full swing and the fertilizer plant at Barauni is also being revived.

The Prime Minister said, “While the Durgapur-Banka link is being dedicated to the nation today, work on the extension of Paradip-Haldia-Durgapur LPG Pipeline onward from Banka to Patna and Muzaffarpur are underway too."

Highlighting the success of the Pradhan Mantri Ujjala Yojana, Mr Modi shared that under the scheme, over 8 crore poor families have been benefitted across the country.

Acknowledging the critical role of Oil Companies in ensuring uninterrupted supply of LPG to households during the lockdown, Mr Modi said, “I heartily
congratulate the oil & gas companies, their staff and associates like the LPG delivery men, who are truly Corona Warriors, and have gone beyond all odds to ensure supply of LPG cylinders to all households during the lockdown."