Centre cuts excise duty on petrol by Rs 8, diesel by Rs 6 per litre 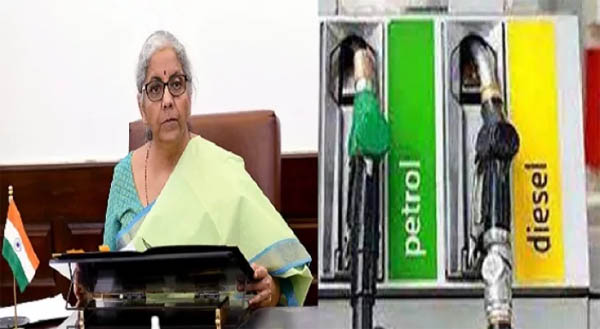 New Delhi, May 21 (UNI) Providing major relief to common man from high fuel prices, Finance Minister Nirmala Sitharaman on Saturday announced that the central excise duty on petrol will be slashed by Rs 8 per litre and on diesel by Rs 6 per litre. The Minister said it will reduce the price of petrol by Rs 9.5 per litre and of diesel by Rs 7 per litre. She said this will have "revenue implication" of around Rs 1 lakh crore per year for the government. The Minister added that state governments, especially those which did not reduce excise earlier should also do so. "I wish to exhort all state governments, especially the states where reduction wasn't done during the last round (November 2021), to also implement a similar cut and give relief to the common man," she said. Sitharaman also announced that the government will give a subsidy of Rs 200 per gas cylinder, upto 12 cylinders, to over nine crore beneficiaries of Pradhan Mantri Ujjwala Yojana. "This will help our mothers and sisters. This will have a revenue implication of around Rs 6,100 crore a year," she said. Sitharaman also announced reduction in customs duty on raw materials & intermediaries for plastic products where import dependence is high. This will result in reduction of cost of final products. "Similarly we are calibrating customs duty on raw materials & intermediaries for iron & steel to reduce their prices.Import duty on some raw materials of steel will be reduced. Export duty on some steel products will be levied," she announced. Sitharaman said that measures are being taken up to improve the availability of Cement and through better logistics to reduce the cost of cement. "Notifications with specific details on all the above will be issued by GoI within the next hour," she tweeted.