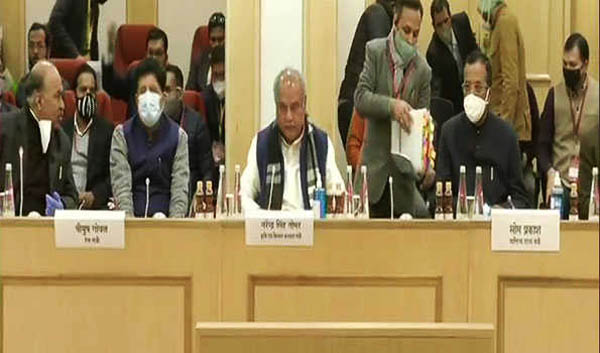 New Delhi, Jan 20 (UNI) The tenth round of talks between the Centre and farmers' representatives  to end the logjam over the three farm laws began here on Wednesday afternoon.

The farmers' protest over the three farm laws entered the 56th day today, as the protestors continued their stir at various entry points of the National Capital region.

Thousands of farmers, especially from Punjab and Haryana, are staging a sit-in protest along the Delhi borders.

The protest started on November 26. The farmers are demanding a complete rollback of the new farm reform laws and a guarantee on the Minimum Support Price.

The first meeting of the Committee, appointed by the Supreme Court to deliberate with concerned stakeholders on the recently-notified three Farm Laws, was held on Tuesday.

The Supreme Court-appointed Committee met here at the Pusa Agriculture Institute and decided to hold its first round of consultation with farmers and other stakeholders on January 21.

The All India Kisan Sangharsh Coordination Committee (AIKSCC) on Monday had asserted repealing of three Acts and the Electricity (Amendment) Bill, 2020 (EB 2020) as the only agenda, to begin the meaningful dialogue.

The ninth round of talks between the Centre and the striking farmer unions on January 15 failed to resolve the deadlock over the three farm laws.