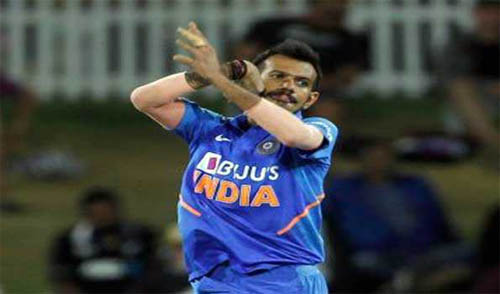 Bengaluru, Sep 14 (UNI) Yuzuvendra Chahal has said his focus is on recovering quickly from the pangs of Covid and hopes to continue the same rhythm he had in Sri Lanka in the upcoming IPL phase 2.

"My entire focus is on the IPL. For now, it's about recovering as quickly as possible because it takes some time to do so after Covid. The rhythm I had in Sri Lanka, I will continue the same during the IPL," Chahal said in an article published in the team's website.

Chahal was forced to sit out of the final two T20s after testing positive for Covid in Sri Lanka. He had finished the ODI series against Sri Lanka as the highest taker with five scalps in two matches.

The leg-spinner expressed his ambition to don the RCB jersey until he decides to call it quits.

"I want to retire with the RCB and it will always be my dream that whenever I play in the IPL, it is for RCB," he said.

On the resurgence of Glenn Maxwell, Chahal credited captain Virat Kohli for it saying that the Aussie knew the captain's expectations.

"I think the captain makes the difference. He knows our captain is the captain of the Indian team as well, who doesn’t like leniency. He likes it when you give your 100 percent on the field irrespective of what you do off it. Maxwell knew that and that slight leniency that was in other IPL franchises he wouldn’t find here," he explained.

There were question marks about Maxwell's batting credentials in the limited-overs format after he hit a lean patch in IPL 2020 season. He answered the critics by amassing 223 runs in six innings for RCB.

Come September 20, Chahal, the second-highest wicket-taker in the UAE leg of IPL, will be raring to hit the ground running yet again.