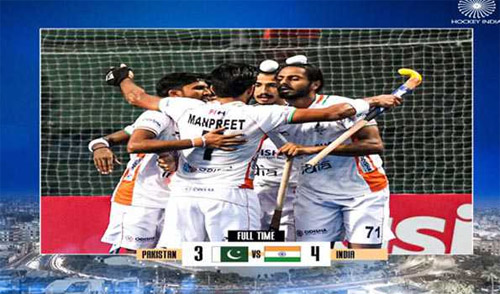 India and Pakistan were the joint winners of the previous edition after the final was abandoned due to rains.

On Wednesday, India earned four back-to-back penalty corners at the very start of the game.

Harmanpreet Singh showcased his skills to convert the fourth penalty corner. In the 9th minute, Afraz equalised for Pakistan with an easy field goal.

A moments later, India got a chance to restore the lead with a fifth penalty corner but Harmanpreet missed the target.

Pakistan earned its first penalty corner in the 14th minute but Krishan Pathak came up with a brilliant save.

In the beginning of the second quarter, Hardik Singh got a 2-minute suspension for infringement.

India was stretching Pakistani players left to right to create a chance for a goal. India earned the sixth penalty corner in the 22nd minute but Pakistan saved it.

In the 12th minute, India penetrated the Pakistani circle but Akashdeep missed the net. India was awarded a penalty corner which the Pakistanis saved.

Pakistan soon counter attacked but Suraj Karkera pulled off a brilliant save.

Both the teams were equally attacking towards the end of the second quarter. India got its seventh penalty corner a moment before the half-time but it was wasted.

There was plenty of action in the closing minutes of the second quarter but the scoreline read 1-1 at half-time.

Pakistan earned its third penalty corner in the 32nd minute and went 2-1 up against India.

India got another penalty corner in the 39th minute but again failed to convert. Pakistan attacked again and India were lucky as Abdul Rana hit the outer pole.

Sumit equalised for India 2-2 from a Gursahibjit Singh pass in the 45th minute.

India missed an opportunity to take the lead in the 49th minute. Afraz obstructed an Indian player, leading to a penalty corner but Pakistan effected a good save.

Pakistan earned a penalty corner in the 54th minute but Krishan saved. Pakistan found Manpreet's foot, leading to another penalty corner which was again blocked by India.

The next minute, Pakistan reduced the deficit 3-4 courtesy Ahmed Nadeem.

With just two minutes left, both the teams stretched each other. Pakistan got a chance but Suraj Karkera came up with a solid defence.

India finished the match with two players down as Hardik and Sumit were shown yellow cards.