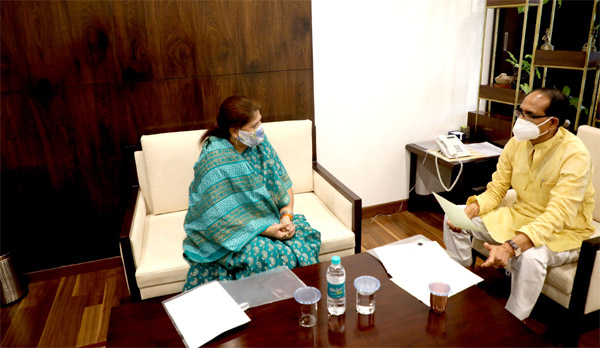 Finance and Commercial Tax Minister Jagdish Deva informed that the economy of the state has been adversely affected due to Corona crisis. Discussion was held in detail with Chief Minister Shri Chouhan on how to increase revenue of various departments in the state. There was also a discussion on increasing of GST collection.

Scheduled Caste Welfare Minister Susrhi Meena Singh informed that work is being done at a fast pace under the leadership of Chief Minister Shri Chouhan for the welfare of Scheduled Castes and Scheduled Tribes in the state. Many schemes are being operated for the welfare of these sections. Continuous work will be done on the roadmap of the department for Aatm-Nirbhar Madhya Pradesh.

Medical Education Minister Shri Vishwas Sarang informed that all preparations are being made regarding the third wave of corona in the state. Health infrastructure and health services are being strengthened. Institutional preparations are being made in this regard. Number of beds, arrangement of oxygen, ICU, children ICU along with other arrangements, arrangements for doctors, paramedical staff and technical staff, their training and alternative arrangements are also being made. Shri Sarang informed that efforts are also being made to introduce some new P.G. courses. There is also a plan to set up a research center for epidemiology at the state level, which will study the COVID-19 pandemic etc. A campaign will be launched to check cancer in women. There is also a plan to build a Bhopal gas tragedy memorial.

Minister of State for Public Health Engineering, Shri Brijendra Singh Yadav said that under the National Water Life Mission, the target of providing clean water through taps to every household by the year 2024 would be completed in Madhya Pradesh by the year 2023. Along with this, work will be done expeditiously on the departmental roadmap of Aatm-Nirbhar Madhya Pradesh.