China, US hold talk on trade and investment 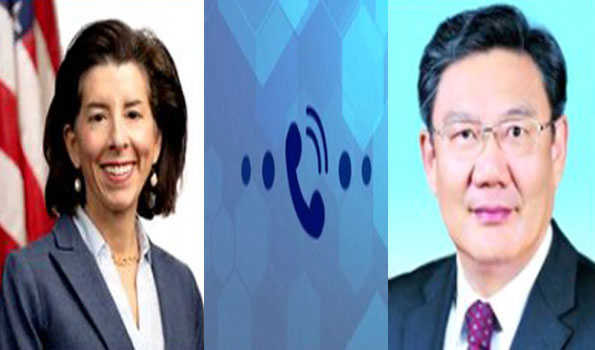 New Delhi, June 10 (UNI) For a third time in two weeks, China and the US held a conversation and exchanged views on economic issues on Thursday, China's Ministry of Commerce said.
China's Minister of Commerce Wang Wentao and US Secretary of Commerce Gina Raimondo talked over the phone, and "exchanged views on relative issues and concerns in a frank and practical way".
During the talks, Wang and Raimondo stressed the importance of dialogue and communication between China and the US in the business field and agreed to promote the healthy development of pragmatic cooperation on trade and investment while properly handle differences.
The two sides agreed to maintain communication in their working relationship.
The latest conversation came about a week after Chinese Vice Premier Liu He spoke with US Treasury Secretary Janet Yellen in a virtual call on June 2.
Liu had a previous phone conversation with US Trade Representative Katherine Tai on May 27.
The Office of the US Trade Representative said in a statement that Tai raised "issues of concern" during the phone conversation, but it did not elaborate.
From January to May this year, the trade volume between China and the US .reached USD 279.64 billion, a year-on-year increase of 52.3 per cent, Chinese state media said.