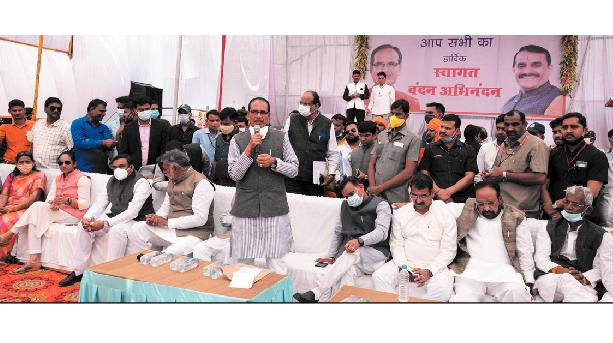 Chronicle Reporter, Bhopal-Chief Minister Shivraj Singh Chouhan met elite persons during his stay in Damoh district and discussed the development of Damoh district. The elite group gave their suggestions about the development of Damoh during the discussion. Chief Minister Chouhan assured that Damoh district will not lag behind in any area of development and there will be no shortage of funds. He told that due to methane gas reserves here, the picture of the area will change. There is good tourism potential in Bundelkhand. It will be fully utilized for development and tourism.
Chief Minister Chouhan said that Prime Minister Narendra Modi has transformed the Corona disaster into an opportunity. He has talked about creation of a self-reliant India. An Atmanirbhar Madhya Pradesh will be made for Atmanirbhar Bharat. Its roadmap has been prepared and the work has started with a resolve. Committed work is being done for physical infrastructure like good roads, irrigation system, drinking water, education, economy and employment.
Chief Minister Chouhan said that today the foundation stone of a medical college is being laid in Damoh. Rs 400 crore is being transferred from Damoh to the accounts of 20 lakh farmers of the state. An amount of Rs one lakh 18 thousand crores was deposited in the accounts of people under various schemes during the Corona period in the state. CM Rise schools will be opened within 20-25 km radius to improve the quality of education in rural areas. In three years time, every village and house of Damoh district will get pure water through taps. Chief Minister Chouhan said that the Ken and Betwa rivers are the lifelines of Bundelkhand. The obstacles in building dams on the Ken and Betwa river have been removed. Dams will be made by connecting rivers and the land of Bundelkhand will be irrigated. Most of the agricultural land in Damoh district will be irrigated. He said that during the discussion, a suggestion has been received regarding the railways, the state government will put it effectively.
He also mentioned about giving land for the building of Kurmi society and permanent pattas to the members of Sindhi community.
The programme was also addressed by Union Minister of State for Culture and Tourism (Independent Charge) Prahlad Patel. He said that his parliamentary constituency includes the three districts of Damoh, Sagar and Chhatarpur. Medical college facility will be made available in all the three districts. Damoh is one such parliamentary constituency that will have a medical college in each district.
Among those present on the occasion are Urban Development Minister Bhupendra Singh, Public Works Minister Gopal Bhargav, Khajuraho MP V.D. Sharma, former ministers Jayant Malaiya, Ramakrishna Kusmaria, Madhya Pradesh Warehousing and Logistics Corporation Chief Rahul Singh, besides local MLAs, social workers, doctors, litterateurs, engineers, advocates, philanthropists, presidents of various communities and senior citizens.