Citizens should be ready again for drinking water crisis 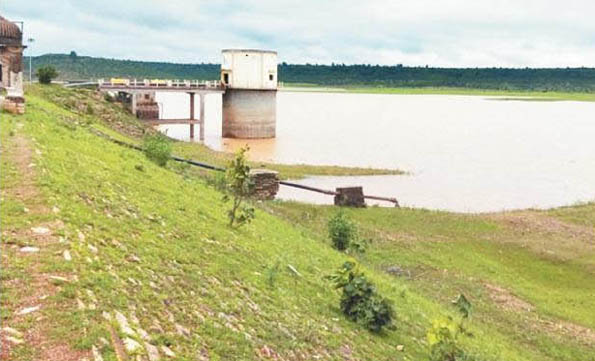 Chronicle Reporter, Panna
Recently, bad news has come to the fore for the residents of the city, who have faced a big drinking water crisis till now in the last summer season that the anyhow water was filled in the lakes this time, as the lakes are the only source of the drinking water problem of Panna Nagar. Out of which residents of the city are dependent on the Dharamsagar, Lokpal Sagar or Nripat Sagar.
In this summer season, the whole city is fighting for drop by drop of water. Perhaps anyone has ever seen such a water problem that as soon as the tanker arrives, people start looting water, neither peace in the day nor rest in the night, there is only one problem i.e. water. People used to arrange water for their use, but what did they know that the people's representatives of the district are going to impose drinking water crisis again.
The water of Lokpal Sagar, reserved for drinking water crisis, was released for irrigation by saying that there is more water in Lokpal Sagar than the water reserved for drinking water. After that, who guarantees that the reserved water will remain clean? Not only this, even today if the water was more than sufficient, then why is the municipality supplying drinking water with a difference of one day in the summer season.
If there is more than sufficient quantity of water, then there should be daily supply of drinking water. When the townspeople pay the bill for one month, then why are they being supplied water for 15 days. Overall, the politics of votes is seen to be heavy on drinking water, so as not to let the farmers get angry with anyone, the crisis was postponed for the time being. The townspeople themselves will suffer. No one can solve the problem, while this proposal was also opposed by the municipality in the meeting.
Significantly, about 80 percent of the water requirement of the city is supplied from Lokpal Sagar, Dharam Sagar and Nirpat Sagar lakes. Among all the three ponds, the capacity of Lokpal Sagar Lake is maximum.
Water released despite CMO's opposition:- After the agitation of the farmers, a meeting was also organized to give the reserved water for irrigation to the people of the city. CMO Vasant Chaturvedi said, a proposal in this regard came in the meeting of the District Water Utility Committee. We had opposed this.
The CMO says that if the water reserved for drinking is supplied for irrigation, then the city may again face water crisis in the coming season.
Despite the opposition of the CMO, the people's representatives came under pressure and in the meeting chaired by the collector, it has been decided to give water to the fields for irrigation. Executive engineer Satish Sharma said that now to ensure the supply of drinking water to the city, apart from the reserved water as per the demand of the municipality, the remaining water will be provided as per the demand of the farmers of the command area. This decision of the district administration has given sleepless nights to the people of the city. Due to the negligence of the district administration, the people of the city faced a historic water crisis a few months back. This decision of the district administration can also push the entire city towards water crisis.
Version:-
We need all the water of the lake. We protested in the meeting as well. If the water is given for the fields, then the city may have to face water crisis in the upcoming summer season as in the previous summer.
Vasant Chaturvedi, CMO
The municipality needs 1.4 MCM (million cubic meters) of water. The farmers were asking for water only for this crop’s irrigation. Due to which they will be released water from the canal only for one time irrigation.
Satish Sharma, EE WRD.