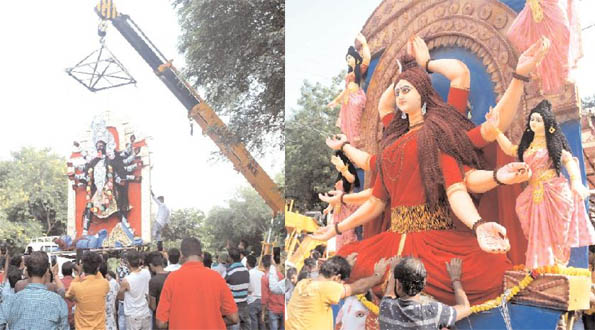 Chronicle Reporter, Bhopal
With people flocking to markets, religious places and garba-dandiya events, the city is gearing up to begin Navratri celebrations. The festival will commence on September 26 and conclude on October 4.
Chief Minister Shri Shivraj Singh Chouhan has extended warm greetings and best wishes to the people of the state on Navratri, the festival of worship of Adishakti.
Chief Minister Shri Chouhan has said that Navratri is a festival of worship, devotion and power of Goddess Durga. He has wished Goddess Durga to remove the sufferings of all the people of the state and bring happiness and prosperity in the state. Chouhan has appealed to the citizens to celebrate the festival of Navratri as per tradition with devotion, restraint and enthusiasm.
The Vyapari Utsav Samiti, New Market has set up a massive replica of the Kubereshwar Temple at Sehore. The 80-foot high and 90-foot wide tableau has a 35-foot high Shivalinga with a 12-foot high Sheshnaag protecting it.
About 25,000 rudraksha will be distributed at the pandal. Ravindra Singh, president of the Samiti, said that the devotees can also see a 40-foot Shiva Baraat. The Durga idol in the pandal, spread over 2.5 lakh square feet is 14-foot high.
Durga Utsav Samiti, Vijay Market, Barkheda, has established a tableau, spread over an area of 65,000 square feet, showing the Char Dham temples. In Kotra Sultanabad, the devotees can have a darshan of the nine forms of Goddess Durga, besides a model of fighter aircraft Rafale. At Tila Jamalpura, they will see Samudra Manthan (churning of the ocean).

Narmada Parikrama theme of Durga Utsav Samiti
Narmada Parikrama is the theme of the tableau of the Durga Utsav Samiti, Bittan Market. The devotees can complete Parikrama of the holy river from its origin in Amarkantak to Bharuch, where it joins the Arabian Sea. Six prominent temples on the banks of the Narmada and their ghats have also been built. A 6-foot idol of Maa Narmada also forms part of the tableau.
The tableau also includes Lord Shiva and Goddess Parwati seated on the Kailash Parvat and scenes of the birth and marriage of Ganesha and Kartikeya.