City gears up to celebrate Sankranti 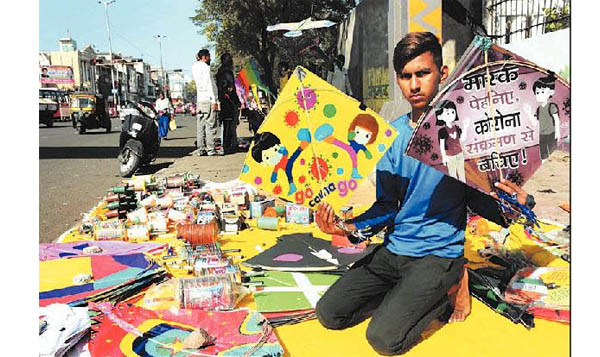 Chronicle Reporter, Bhopal-The city is geared up to celebrate Makar sankranti on Thursday and the sale of kites has picked up. On Makar Sankranti on 14 January, thousands of people will take a bath in the Kshipra River. Ujjain Municipal Corporation Commissioner reached Ram Ghat with the officers and took stock of the arrangements. During the rains, the mud stopdam on the Kanh river at the Triveni was washed away due to which the discharge of contaminated water into the river has been going on.

From Triveni to Ramghat, the contaminated water of Kanh was stored in the Kshipra River, due to which people had to take bath in contaminated water. The contaminated water store was stored in the Kshipra River as the mud stopdam on the Kanh River washed away during the flood. The PHE department opened the gates of the stopdam built on the river and allowed the contaminated stored water to flow further and Narmada water was poured into Kshipra River through pipeline. Currently the water level at Ramghat of Kshipra river is three feet below normal, while the clean water of Narmada has been collected at Triveni stopdam which will now be extended towards Ramghat. Officials say that people will be given a festival bath on Makar Sankranti from the clean water of Narmada.

Meanwhile, preparations for Makar Sankranti Mela are nearing completion at the site of Narmada’s Retghat. This time the facility of pucca bridge will be available from Narmada’s Sidhighat to the site of the Retghat fair, due to which the traders also hope that the movement of people in the fair will be more than after the corona period and the loss they have suffered during the lockdown will be met by the fair’s subscription. Around 50 CCTV cameras will be installed at the fair venue for security. To maintain cleanliness at the fair venue, about 50 temporary toilets will be built as well as a team of employees will be appointed to clean the fair site every day.

The process of setting up shops, including allocation of space at the fair site, is going on at a fast pace. The fair will be inaugurated on January 13. This time, a force of about 500 personnel will be deployed at the fair venue for safety of traders and visitors, as well as about six watch towers will be built at the fair site. A Home Guard swimmers’ team will be present on the Narmada coast and patrolling will be done through boats. Traders are coming to the fair from various places to install their shops. Work is going on vigorously to make arrangements at the fair site under the supervision of the administration of Barman’s Makar Sankranti Mela. Temples of Narmada’s Retghat and Sidhi ghat temples are being decorated. This time in the Sankranti fair, permission not give for swings and death well, although officers are hoping that may be permission will be granted later.