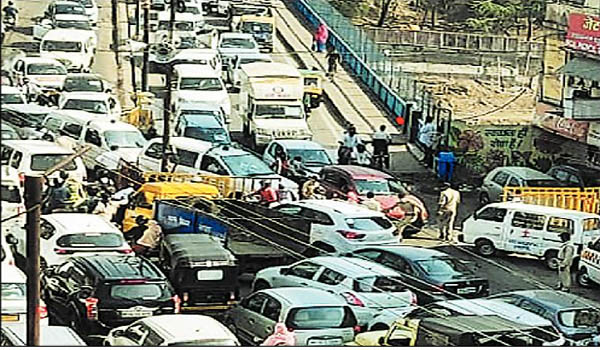 Chronicle Reporter, Bhopal
Corona's transition in the capital is growing rapidly. Most of the cases are coming from Kolar where everything is closed till 6 am on April 19. When the two-day lockdown ended in the rest of the city on Monday, people left Kolar Road. There was a long queue of vehicles on both sides near the Sarvadharm Pul here at around 9 am. The police were checking and inquiring whether the people of Kolar, Shahpura had left without any valid reason. Due to this there was heavy jam. The people who were coming to Kolar were returned by the police while those who were going out unnecessarily were also stopped.
After the two-day lockdown ended in the city, there was a long queue of vehicles to and fro in Kolar, which has been made as a Containment Zone and placed under lockdown till April 19.
Meanwhile, Chief Minister Shivraj Singh Chouhan has said that there is no need for anyone to panic in the state. A three-tier strategy is being worked out to control Corona infection. To prevent the spread of corona infection, a massive public awareness campaign is being launched under which, activities like Swashya Agraha, Roko-Toko campaign are being conducted.
Supply of material required for treatment, increase in number of beds and efficient management is being ensured. Along with this, the vaccination campaign has been made intensive and extensive. People should be patient and tolerant. The state government is making every effort to maintain the arrangements. The CM said Corona situation will be controlled with the help of the society. Information on the management of Corona infection will be informed through press briefing daily.