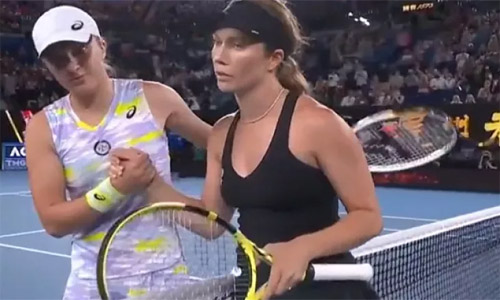 Melbourne, Jan 27 (UNI) Danielle Collins defeated Iga Swiatek 6-4 6-1 to soar into the Australian Open 2022 women's singles final here on Thursday. This is her maiden Grand Slam final. Collins gave a run for money. Swiatek did not have any answers against a flurry of wins down the line, fired from the racquet of the American. Collins grabbed the first game after the Pole double-faulted at a crucial juncture, capitalizing ruthlessly, before missing a single point on serve and then securing a double break, leaving the world number nine gaping at the American's show of tennis. The American took control of the match in the first game of the second set forcing Swiatek's slide. Her rival surrendered a double break with little effort. Swiatek sprung to take Collins to deuce at 3-0, but the American won the game with a powerful serve. Thereafter, both Swiatek and Collins battled it out until the latter pocketed the match with her sixth and final break. The 2019 semifinalist at AO ended with 82 percent of returns in, prevailing in 86 percent of points on the Swiatek second serve. The front foot, first-strike game plan was delivered in style. Talking about her triumph, Collins said, "Feels amazing. It's been such a journey and it doesn't happen overnight. It's so many years of hard work and hours in an early age on court," reflected Collins, 32-7 on tour since last July after having undergone emergency surgery to treat endometriosis last spring. "All the early mornings my dad would practice with me before school, and it's just incredible to be on the stage. Especially with the health challenges, I'm just so grateful. I couldn't be happier." On Saturday, Collins faces the toughest test ever against World Number One and tennis enthusiasts all over the world are expecting a cracker of a match. It will be a battle between Barty's all-court craft and Collin's power-hitting beaming off her racquet. At the start of 2020, Barty needed a third set tiebreak to outlast Collins in Adelaide. In the same tournament, the American revenged 6-3 6-4 win against the classy Australian, demonstrating the explosive level needed to defeat the top seed. "We've had some incredible battles over the years and to play against the number one player in the world and in her home country, I think it's going to be really spectacular," Collins said. "I love the energy the fans bring whether they're for me or for my opponent. I think we're just so grateful after everything with Covid to be able to have incredible energy and people here supporting us. So, I'm just excited to have everybody back. "Looking forward to hopefully having a great match and battling away with Ash."