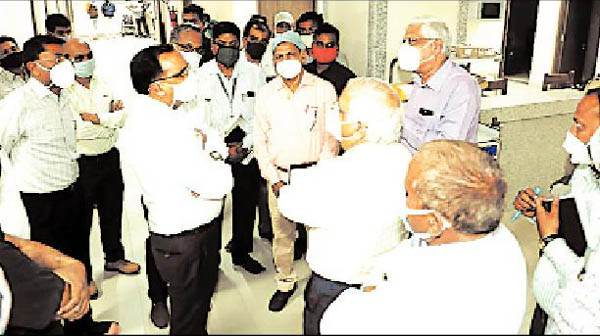 Chronicle Reporter, Bhopal
In the new building of the capital,s largest hospital, Hamidia, it is difficult for 240 beds of Covid patients to be available even after five days. Earlier it was said to start from April 1. It was decided to start the hospital from April 5 after completing the preparations for the ward.
On Monday, Divisional Commissioner Kavindra Kiyawat visited to see the preparations of the new building. During this time, the divisional commissioner found many flaws. In any ward, medicine was not kept in the store room and the table was not found in the duty room.
=Will teach you a strong lesson
The divisional commissioner gave instructions two days ago for lighting, fan and cleaning in the changing rooms of the doctors in Covid ward. The condition of the room was found same during the inspection. The Divisional Commissioner expressed his displeasure over this. Taking a dig at the PIU and the cleaning agency officials, he said that he will teach them a powerful lesson. They don't do any work
=Officer and superintendent clashed
The divisional commissioner noticed several flaws during the inspection. Officers also started cleaning it. On this, Hamidia Superintendent Dr. ID Chaurasia and PIU officer Ashok Sharma started putting responsibility on each other in front of Divisional Commissioner.
=No work planning
The work of installing AC in the ward was going on from the PIU. When the Divisional Commissioner arrived here, the beds were found in disorder. The Divisional Commissioner expressed his displeasure and asked how harmony among you is. Now who will fix these beds? The Divisional Commissioner told the PIU officials that you do not have plans to work. You are doing random work.
= Beds found missing here
When the commissioner reached the ward of the 7th floor, the beds were found missing here. When the Divisional Commissioner asked the officials in this regard, they started looking at each other. The Divisional Commissioner reprimanded all the officials including PIU for the incomplete preparations for the Covid ward. Notably, Hamidia administration is preparing to increase 800 beds of Corona. Right now only about 300 beds are available for corona patients.
= Four corona positive arrived in incomplete ward
On Sunday, Corona positive patient was sent to for admission in the ward of the new unfinished building of Hamidia Hospital. The four patients also reached the fifth floor from the lift. The nurse on duty in the ward sent the patients down saying that they were not ready to start the ward and informed the senior officials. After this, all four patients were admitted to the ward in the TB Hospital by sending them by ambulance.