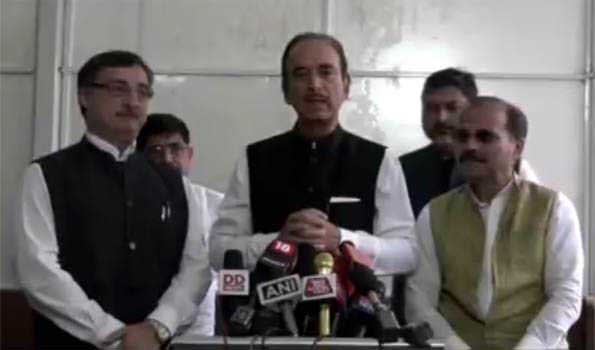 New Delhi, The Congress on Thursday hit out at the BJP over the alleged 'poaching' of MLAs and said that the saffron party has been systematically 'destroying' democracy in every state since it came to power.'It started with Arunachal Pradesh then Karanataka and recently in Himachal Pradesh, despite BJP not being in majority, a BJP Chief Minister took oath,' said Congress Rajya Sabha leader Ghulam Nabi Azad along with his Lok Sabha counterpart Adhir Ranjan Chowdhury, party legal cell head Vivek Tankha and communication in-charge Randeep Singh Surjewala.The Congress response came a day after the Kamal Nath government faced a serious crisis that 10 of its MLAs had gone to Delhi, in which the grand old party alleged that the MLAs were lured away by the BJP and was keeping them against their wish.

The BJP, however, denied the charge and alleged that the factionalism within the ruling-Congress has played out ahead of the crucial Rajya Sabha election.
'The atmosphere created by BJP in the country, targeting and breaking opposition party leaders with threats of raids etc and forcing them to join or ally with BJP so they can form government,' Mr Azad further said.He said that what is going on in Madhya Pradesh is not a first.'It is perhaps the third or fourth attempt. We condemn this and if this goes on, we will take strict action against it. We urge other parties to join us in this fight,' he added.Mr Chawdhury said that the BJP has been hatching a conspiracy to dig the grave for democracy in the country.'They are exhausting all resources to pressurise Congress MLAs. Everyone must unite for this cause to save the democracy,' the Congress leader said.Mr Tankha alleged that the BJP tried to do this in Chhattisgarh by tax notices and now in Madhya Pradesh.'It is the strength and vigilance of the Congress that we were able to bring back our MLAs,' he added.