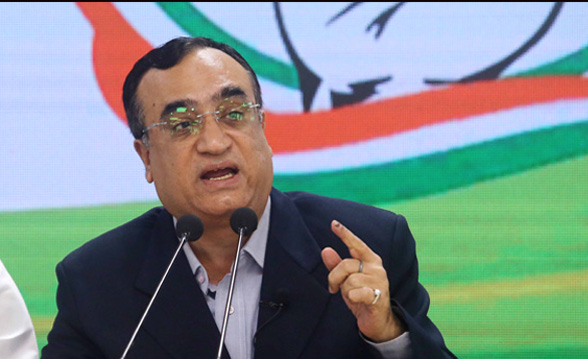 The Congress on Saturday alleged that the Narendra Modi- Amit Shah government has looted the people by increasing excise duties and huge taxes on petroleum products, demanding a roll back of excise duty hike, which was announced early in the morning.

The opposition party's response came hours after the Union government has hiked excise duty on petrol and diesel by Rs 3 per litre each to get around Rs 39,000 crore additional revenue.

"Member of Prime Minister's Economic Advisory Board, Nilesh Shah has himself conceded that the government has earned a profit of Rs 3.4 lakh crore by not passing on the benefits of reduced oil prices to the consumers", said Congress spokesperson Ajay Maken while addressing reporters at AICC headquarters.

He said that the Modi government must pass on the benefit of low crude rates.

He pointed out that by increasing the excise duty, the total incidence of excise duty on petrol has risen to Rs 22.98 per litre and that on diesel to Rs 18.83.

The Congress leader said that "monstrous taxes levied by the Modi Government have resulted in the skyrocketing petrol and diesel prices, which is major cause of rising transportation costs and resultant inflation. For last 6 years, government and oil marketing companies have been making huge windfall gains. The BJP Government in total would have made a profit of Rs 20 lakh crore by charging exorbitant taxes on petrol-diesel", the Congress spokesperson alleged.

He also said that the government did not bring petrol and diesel under GST despite the consistent demand of Congress party.

"Benefit of reduced international crude oil prices should be extended to people and rates of petrol-diesel-LPG gas be reduced by at least 35-40 per cent and petrol and diesel should be brought under GST", the Congress leader said.

He also demanded the hike in excise duty, customs duty effected by Modi Government since May 2014 on petroleum products should be withdrawn immediately until it is brought under the GST regime.