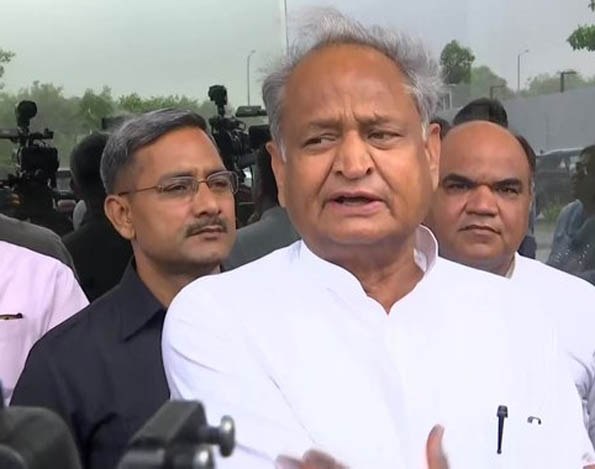 Pravesh Kumar Mishra Chronicle
New Delhi
After several rounds of brainstorming, the Congress strategists tried to find a way of reconciliation along with disciplinary action to end the squabble in the Rajasthan Congress, retain the supremacy of the party high command and elect a new national president. In this sequence, Rajasthan Chief Minister Ashok Gehlot, talking to Congress President Sonia Gandhi, described himself as a dedicated soldier of the party and on the other hand the youth leader Sachin Pilot has been called to Delhi. If sources are to be believed, senior party strategists are not in favor of strict action against Ashok Gehlot. They believe that if Gehlot is willing to step down as the Chief Minister, then sympathy should be given to him, mostly senior leaders are in favor of taking immediate strict action against Rajasthan ministers who formally challenge the central leadership. So that in future such indiscipline cannot be repeated in any state.

Gehlot says he can’t challenge High Command
Sources are telling that Gehlot was restless to give clarification while talking to Sonia Gandhi since Sunday night, but Sonia Gandhi was so angry that she was not ready to talk. But after the constant efforts of senior party leaders, Sonia Gandhi has spoken to Gehlot. It is being told that Gehlot has clarified that he cannot challenge the high command at any level. After this, he has sought time to present his explanation by appearing physically but Gehlot's arguments have not yet worked and the deadlock continues. On the other hand, due to the strict stand of the party's central leadership, many MLAs of the Gehlot faction have changed sides and agreed to obey the order of the high command.

Most of MLAs are showing loyalty to party
In such a situation, it is being said that now Gehlot is stuck in his own game and his chair is in danger because most of the MLAs have reached Delhi and are trying to show their loyalty to the party leadership. Therefore it is possible that the party leadership may try to maintain its supremacy by handing over the command of Rajasthan to Sachin Pilot. Sources are telling that senior leaders including AK Antony and Kamal Nath are still trying to find a way to a respectable reconciliation.

Kamal Nath first choice
Not only this, Sonia Gandhi had a long conversation with Antony about the name of the new president, Kamal Nath is still the first choice. The names of senior most leaders like Mallikarjun Kharge, Pawan Kumar Bansal, KC Venugopal, Mukul Wasnik and Digvijay Singh are also being considered for the post of president. Sources are telling that party General Secretary Priyanka Gandhi has tried to end the displeasure of Sonia Gandhi and Rahul Gandhi with Ashok Gehlot by talking to them. She argued that if Gehlot accepts his mistake, he should not be thrown out of the race for the post of President. But other leaders argue that the wrong message has been sent among the party workers about Ashok Gehlot, so if he is to be trusted, it is possible that the party delegates (who are voters) may mobilize against Gehlot in the election. Therefore the party is not ready to take any decision in haste. However, the inconsistency still persists.