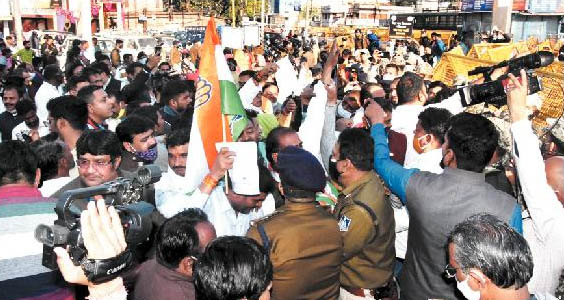 The Congress organised protests against the agricultural laws and in support of the ongoing farmers' movement in Delhi. State Congress President and former Chief Minister Kamal Nath took out a tractor rally at Chorai in Chhindwara. While in Bhopal, party workers sat on a dharna at Roshanpura intersection under the leadership of former Minister PC Sharma. Former Minister PC Sharma said that this law of the government will force the farmer to contract farming. He said 70% of MP economy is based on agriculture. Despite this, only 20% of the farmers in the state get the benefit of MSP. Farm laws will affect the farmers of Madhya Pradesh the most. The Congress is with the farmers on this issue. The central government wants to ruin the farmers by implementing all the three bills. In protest against this, the Congress is doing a lot of work in the entire state. District Congress Committee President Kailash Mishra was also present in the dharna. The Congress leaders addressed the dharna and demanded the Centre to immediately repeal the farm laws.

Party leaders told that a comprehensive chakka jam was done at district and block level in state on Friday. In this way, an atmosphere will be created in support of farmer demands. They said Congress opposes the contentious farm laws and central government decision to mortgage rural economy into the hands of few industrialists.

The Congress leaders further added that on January 20, a massive farmers’ convention will be organised in Morena and it will be attended by Congress leaders and farmers of entire Chambal division. Apart from this, gherao of Raj Bhawan will be done in support of farmers’ demands on January 23. They told that Union Government should shun obstinate path and should come forward for protection of farmers. BJP has criticised the Congress for trying to find its existence in the garb of farmer movement. It said that Congress is trying to do politics over farmer movement. On January 16, there will be a farmers' conference in Chhindwara.

Former Chief Minister Kamal Nath led a tractor rally in Morena. He alleged that farmers and industrialists will become bonded laborers with the implementation of the three agricultural bills of the central government. We have gone on the road to protect the interests of farmers. This will badly affect the rural economy and farmers. He said that the central government is working to eliminate the farmers. The foundation of agricultural laws is weak. We alone are not only doing this law, but the NDA constituents are also opposing it. Because it is a law that will abolish mandis and MSP.

In order to show its solidarity with agitating farmers near Delhi and to register its protest against three contentious farm laws, Congress staged two-hour road blockade at more than 500 places in State on Friday. Massive preparations had been done by Congress in this regard.