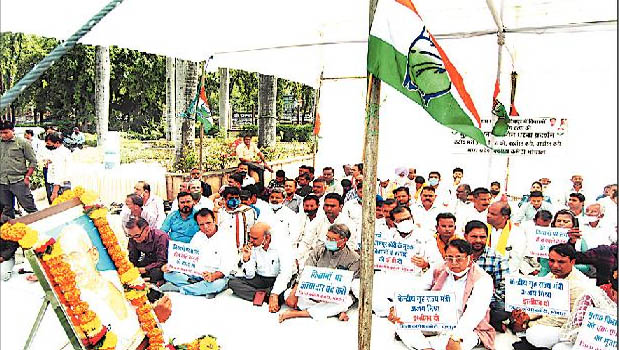 Bhopal: Congress organized silent protest against the incident of Lakhimpur Kheri in Uttar Pradesh and demanded the resignation of Union Minister of State for Home Ajay Kumar Mishra. Congress leaders sat on a silent dharna for an hour in front of the Gandhi statue in Minto Hall. After the demonstration, a memorandum was submitted to the Governor.
Bhopal District Congress Committee President Kailash Mishra told that farmers were killed in Lakhimpur Kheri, Uttar Pradesh. The District Congress Committee has staged a silent protest over this incident on Monday. Party leaders said that still the resignation of Union Minister of State for Home Ajay Kumar Mishra, who conspired to save the son in the incident, has not been done. He has no right to continue in the post after the incident.
Congress workers sat on ‘Maun Pradarshan’ (silent protest) before Gandhi’s statue at Minto Hall. The protest is part of a call given by the Congress for resignation of union home minister for state, Ajay Mishra.
Congress is holding the silent protest across the state at all district headquarters. In Bhopal the protest was held at the Minto Hall before the statue of Mahatma Gandhi. Former minister and Congress MLA PC Sharma and several other Congress workers assembled near the statue and organized a sit-in.
Bhopal district Congress president Kailash Mishra said that farmers were crushed in Lakhimpur Kheri in Uttar Pradesh. This protest was part of Congress’ call for all India protest to demand resignation of union minister of state for home, Ajay Mishra.
“We remained on protest for an hour and then submitted a memorandum to the Governor,’ said district Congress president Mishra. Congress has demanded that the union minister of state for home should resign to ensure justice.