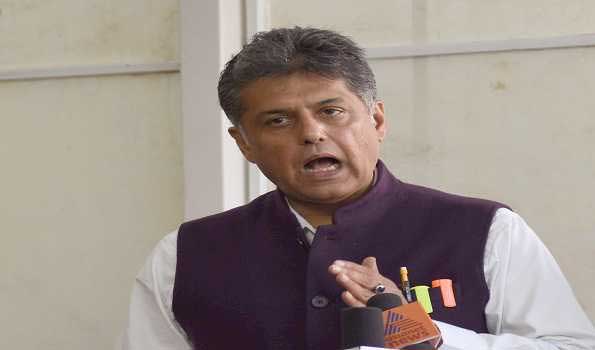 New Delhi,  The Congress on Wednesday accused BJP-led Union government of 'trying to create surveillance state' and violating the 'Right to Privacy', in the midst of news report that the government sought call data records (CDR) from telecom companies."Reports which have emerged in the public is extremely disturbing because the government has decided that it will carry out mass surveillance against the citizens of India. A sinister premeditated, orchestrated plot has been put in place in order to unleash the mass surveillance program against the citizens of India, which is absolute transgression of the Right to Privacy guaranteed by the Supreme Court of India in a 9/0 judgement." said senior Congress leader Manish Tewari, while addressing reporters on the Parliament premises. He said that the Supreme Court had said that Right to Privacy is a fundamental right, but the BJP-NDA government is continuously violating it.

"The Government has sought call details for a select few individuals from telecom companies. This is a violation of privacy, we ask the government that under what law are they seeking these details", he asked.The Congress spokesperson further said an Orwellian state has been sought to be created, and added that "we will hold the government to account in violation and transgression of the rule which was tighten by the then UPA government in 2013, with regard to obtaining call data records, with regard to electronic interception of telephone and with regard to cyber communication"."We strongly deprecate the assault on the fundamental freedom, which have been provided by the constitution and have been interpreted by the Supreme Court," said Mr Tewari. According to media reports, the Department of Telecommunication has sought call data records on the specific routes for the period in February.