Congress' Chintan Shivir to focus on plan for 2024, giving younger face to party 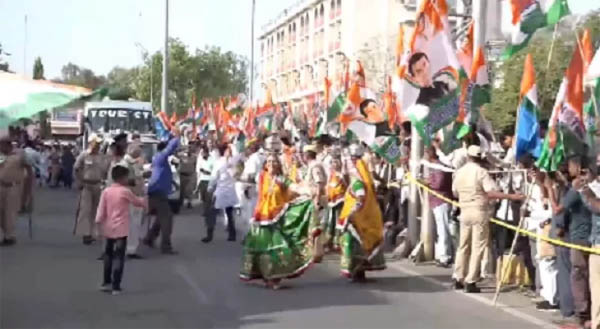 New Delhi, May 13 (UNI) With eyes on the 2024 Lok Sabha polls, Congress will on Friday start it's three-day brainstorming camp aiming to come up with an actionable plan for the party's revival. The 'Chintan Shivir', which has been named 'Nav Sankalp Shivir' is aimed at infusing new blood and life in the party, which months ago faced embarrassing defeat in polls in five states, pushing party President Sonia Gandhi into calling this meet. The meeting also comes amid continuing suspense over whether Rahul Gandhi would take charge as the party president and demands by several party workers and leaders for him to take the top post. The Congress has said a new president will be elected by September, and the process for presidential elections are on. According to a senior party leader, among the issues listed for discussion is giving the party a younger face. According to party leaders, of the around 430 leaders who are attending the Chintan Shivir, 50 per cent members are below the age of 50, and almost half of them are below 35 years of age. Meanwhile, 21 per cent delegates are women. Among the ideas that will be discussed are age cap for holding organisational posts, limiting terms for Rajya Sabha members, and 50 per cent reservation for SC, ST, OBC and minorities in the organisation. Proposals have been given to discuss issues like 'one leader, one post' and 'one family, one ticket'. A senior party leader however underplayed the proposed discussion on limiting number of tickets given to a family, and said it was just one of many issues listed for discussion. Congress President Sonia Gandhi, at the Congress Working Committee meet held earlier this week had told party leaders there is no 'magic wand', and has asked for an actionable plan. Communal polarisation across the country and how to deal with it, is going to be among the most important issues to be taken up for discussion under political issues, said a source. The party's take on alliances with other parties and its take on different regional parties is also likely to be taken up. Congress' position vis a vis regional parties is also likely to be discussed. On the economic front, party leaders will deliberate on privatisation of public sector enterprises, inflation, rising petrol and diesel prices among other things. The state of economy post the Covid-19 pandemic, and earlier moves of demonetisation and GST will be discussed as well. On youth issues, unemployment, new education policy, alteration of text books and syllabus will be discussed. The panel on youth and empowerment has also proposed reserving 50 per cent of the seats for leaders below 50 years of age. For the first time, a separate panel has also been formed to discuss farmers' issues, which is headed by party leader Bhupinder Singh Hooda. Asked if the suggestions given by political strategist Prashant Kishor to the party will also be discussed, a party leader said there was nothing in the documents that the Congress did not know. The Nav Sankalp Shivir will start with Congress President Sonia Gandhi's speech, while party leader Rahul Gandhi will deliver a speech on the last day of the meet on May 15.