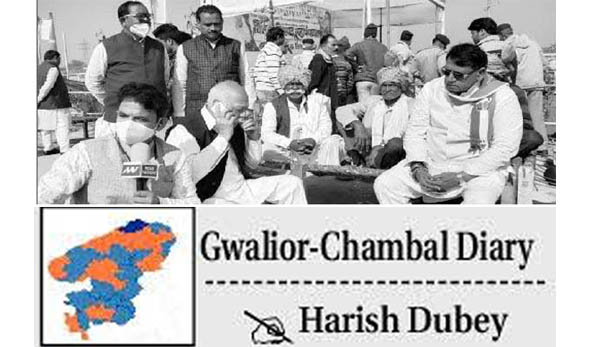 On one hand, agitating farmers along the Delhi border are adamant on taking out a tractor parade on Republic Day to demand the repeal of three agricultural laws, while the Congress launched a protest at Devari on the banks of the Quarri river in Chambal valley to support the farmers- agitation. By organizing a big khat mahapanchayat, it was clear that it is standing together in this fight for the rights of farmers. The Congress chose this site of the Morena district for the Mahapanchayat because geographically it is the region of MP closest to the Delhi border. Among the farmers sitting on the Delhi border, the maximum numbers of farmers from Madhya Pradesh are from Chambal Valley. However, in the Kisan Mahapanchayat held in Chambal, almost all Congress veterans of MP including Digvijaya Singh, Kamal Nath, Ajay Singh, Arun Yadav, Suresh Pachauri, PC Sharma, Jitu Patwari, Vikrant Bhuria, Bala Bachchan, Kamleshwar Patel, Dr. Govind Singh took part. Congress leaders have also indicated that in the fight for political supremacy in the state, even though they appear to be at loggerheads, they are united together when it comes to protecting the interests of the farmers. It is certain that the farmers’ movement on the Delhi border will be strengthened by this mahapanchayat held today.

Politics on farmers in Gwalior
Not only in Chambal but also in the city of Gwalior, there is the heat of the peasant movement, here too the leaders of the Congress and the Left parties are busy giving support to the farmer stir. The protest of Left and social organizations at Phoolbagh Gate has been going on for the past several weeks. The Congress sat on a separate dharna led by the city chief, while Congress MLAs from Gwalior East and South, Satish Sikarwar and Praveen Pathak also staged demonstrations at Inderganj and Hemu Kalani Chowk. Mitendra Darshan Singh also tried to show his presence by holding an indefinite dharna. On the other hand, local leaders of BJP are also trying to counter Opposition. Although the ruling party did not make any big effort after the joint farmers’ conference held at Phoolbagh Maidan under the leadership of Narendra Singh and Scindia last month, the process of counting the benefits of agricultural laws to farmers is still going on.

Gwalior Fair bhumi pujan likely on Jan 30
It has now been decided that despite the Corona crisis, the Gwalior fair will also be held this year. If the things take place as planned by the administration then on January 30, Shivraj Singh will come to Gwalior and duly perform bhumi pujan of the fair. After this, the fair will start in February and the fair complex will buzz with activities till Holi. Due to the tremendous pressure of the trade unions, the government and administration have given permission to hold the fair, but there is risk of spread of Corona due to the crowd gathering in the fair. The traders have been asked to take precautionary measures in this regard. The functionaries of the fair traders associations have themselves got involved in sanitizing and cleaning the fair campuses.


Pradyuman Singh still away from public
The exile of the Energy Minister Pradyuman Singh Tomar is not ending anytime soon. Maharaja came to Gwalior but Pradyuman Singh was not with him. He was not seen with Maharaja during his two-day tour. It was told that he is recuperating at the Bhopal bungalow after being unwell. The news is that Pradyuman himself called Maharaja and apologized for his absence. Pradyuman had posted on his Facebook page two weeks back that he would remain away from public life for some time. The speculation that started with his shocking news has not stopped. The reason is that Pradyuman has not been away from the people of his constituency for so long before this.