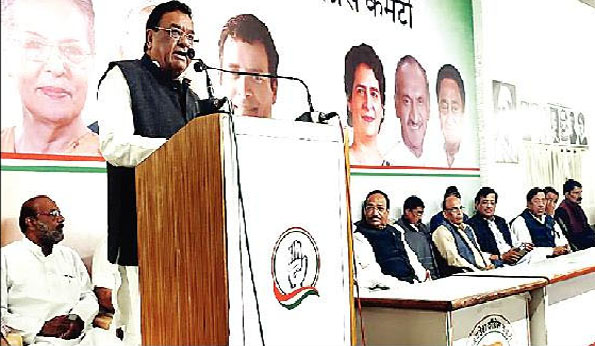 Many leaders engage in PCC
Chronicle Reporter, Bhopal
Preparations are on in full swing under the leadership of PCC Chief Kamal Nath regarding the assembly elections to be held in the month of October-November in the state. At the same time, from January 26, the Hath Se Hath Jodo campaign is also being prepared keeping in mind the electoral calculations. While BJP leaders say that like Rahul Gandhi's Bharat Jodo Yatra, this campaign will also prove to be unsuccessful.
With this, Kantilal Bhuria, PC Sharma, District Rural Congress President Arun Srivastava, City Congress President Kailash Mishra and many big Congress leaders including Bhupendra Gupta, JP Dhanopia reached the PCC on Monday to chalk out a strategy. However, the number of workers was seen less during this period. More than a dozen leaders were competing to sit on the stage and many leaders had to sit on the chair next to the stage. In fact, Atif Aqeel, son of senior Congress leader Arif Aqeel, also reached, when all the chairs on the stage were full, a chair was arranged for him next to the stage.
Talking to Navbharat Samachar after the meeting, senior tribal leader of Congress Kantilal Bhuria said that the preparations for the Hath Se Hath Jodo campaign have been completed. In this campaign, we will reach the people of the village and discuss the anti-people policies of the BJP.
Kamal Nath will lead the state campaign- He told that on January 26, the campaign will be launched across the country and from February 1, the program of visiting every village of the state to contact people will start. On the upcoming state executive meeting of BJP, he said that this is his homework. We have also done homework. If democracy is to be kept alive in the country, if the constitution is to be maintained, then the Congress will have to be brought in. Congress is the only party which believes in democracy and constitution.
Campaign launched from Huzur Vidhansabha.... The campaign will be launched on January 26 under the leadership of State Congress President Kamal Nath from Mughalia raid of Huzur Vidhansabha of capital Bhopal.
Campaign will run for two months.
In-charge of the meeting, Mukesh Nayak said that this campaign will continue for two months in the entire state. Through this campaign, senior Congress leaders and workers will reach out to the people through different types of programs in all the areas and call upon them to give their support in favor of the Congress and form the Congress government in the assembly elections.