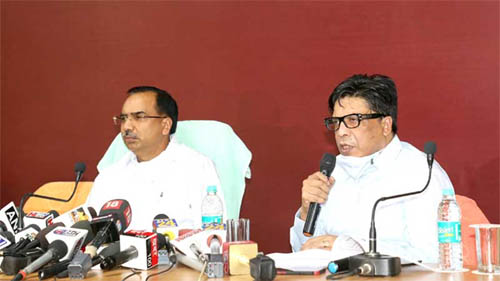 = All records broken, 10 percent infection rate for first time
= State government has made arrangements for 3 lakh 84 thousand beds
Chronicle Reporter, Bhopal
Like the whole country, the situation of Corona has become worrisome in Madhya Pradesh also, 3 thousand new cases are coming every day. The top officers of the state themselves admitted that never before have so many cases of corona been coming. The situation is such that in Bhopal on Monday, Additional Principal Secretary of Health Department Mohammad Suleman and Additional Principal Secretary of Home Department, Dr. Rajesh Rajora gave a press conference to the government media to update the official events and Corona.
Officials admitted that there have never been so many cases of corona in the state as many as are coming now. Madhya Pradesh is the 7th state in the country where the highest number of positive cases is being received. We have 3.4% active case load in the country which has never been before. Our positive rate was 1.1 percent in January, which has now increased to 10 percent. More growth is coming now than before.
After March 14, more patients - Officials told that since March 14, the graph of getting new patients of Corona has increased rapidly. About 15 thousand cases are coming in a week. Earlier, 15 thousand people used to come for testing, now more than 30 thousand people are coming. Earlier, in October 2020, 2607 cases were received in a single day, but now more than 3 thousand new patients are being found in one day.
On oxygen support in the hospital, 27 per cent of the patients said that the capacity of beds in hospitals is being increased. This availability is the biggest challenge for us. In hospitals, 27 per cent of the patients are on oxygen support. The number of people coming for the test is constantly increasing. Bus transportation from Maharashtra till April 15 is completely closed. In the first wave, Covid patients in private hospitals were negligible, but now there are more patients admitted in the private hospitals than the government.
On the questions asked about the infection situation in Damoh, officer did try to escape from the questions, Dr. Rajaura said that all the programs are being organised on the same guidelines. Everyone is being asked to follow the guide line. We have given 42 lakh 43 thousand vaccines so far. However, despite repeated inquiries on the situation of Damoh, both officers were seen escaping.
= No guarantee of coming positive after vaccination
On the question asked about the vaccine, Additional Chief Secretary, Health Mohammad Suleman said that there is no guarantee that after the vaccine there can be no corona. We have to maintain the mask and social distance even after that. You will be safe after applying two doses. He said that rumors are running on social media. You should not pay attention to it. Avoid it.
= Two crore invoiced for not wearing mask
Rajesh Rajaura said that strictness is being followed to put on mask. People's invoices are being cut. Invoices of 1 lakh 61 thousand people have been made so far in the entire state. A recovery of 1 crore 85 lakh has been made from this. 636 establishments have been sealed for non-compliance. Around 1600 cases have been registered.