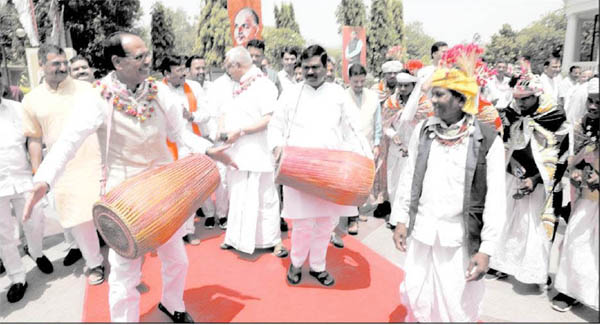 Chronicle Reporter, Bhopal
Chief Minister Shivraj Singh Chouhan has said that speedy work will be done in the direction of providing employment to tribal youth by honing their skills. On the one hand, where tribal youth need employment, in rural areas there is a need for technical proficiency electricians, plumbers, masons, vehicle mechanics etc. In such a situation, Rural Tribal Technical Training Programme in Parliamentary Complex Project for tribal youth in collaboration with National Skill Development Corporation will prove to be worthwhile.
Chouhan was inaugurating the Rural Tribal Technical Training Program at Kushabhau Thackeray Auditorium here today. The districts of Chhattisgarh, Gujarat, Rajasthan, Maharashtra and Orissa including Madhya Pradesh have been selected for the pilot project in the first phase.
Chouhan said that the work of preparing rural engineers and training of youth has been done through Global Skill Park of Bhopal in Madhya Pradesh. Today such an innovative scheme is being started. Chouhan also informed about the assistance being given to the youth through the Mukhya Mantri Udyami Yojana.

CM plays musical instruments with tribals
Earlier, on reaching Kushabhau Thackeray Auditorium, CM Chouhan met tribal dancers from different tribal dominated areas of the state. On being welcomed, Chouhan himself entered the venue by playing musical instruments along with tribal artists. The programme started with the collective rendition of Vande Mataram.

NSDC & CRISP to train tribal youth
The MoU (Letter of Agreement) between CRISP and NSDC  (National Skill Development Corporation) was signed today. Under this MoU, technical training will be provided to rural tribal youth. The institutes will work together in the field of research. In this contract, rural tribal technical training will be provided under Parliamentary Complex Project in collaboration with CRISP, Yuva Vikas Society and NSDC.
CRISP and NSDC will have a strategic partnership in the contract. Rural entrepreneur project will be implemented in Madhya Pradesh with the cooperation of NSDC, in which training will be given by selecting beneficiaries from 22 thousand 811 panchayats. Youth will be given technical and futuristic training in collaboration with NSDC, which will be useful in future for work in the areas of skill.