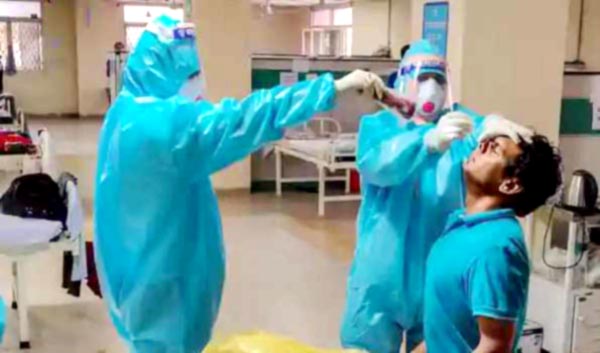 New Delhi, Mar 3 (UNI) Maharashtra, Kerala, Punjab, Tamil Nadu, Gujarat and Karnataka continued to witness surge in novel coronavirus infections and account from 85.95 of the caseload in past 24 hours.

A total of 14,989 new cases were registered in a span of 24 hours, of which Maharashtra reported the highest daily new cases at 7,863, followed by Kerala with 2,938, while Punjab reported 729 new cases, Ministry of Health and Family Welfare said in a statement on Wednesday.

Maharashtra, Punjab, Gujarat, Madhya Pradesh, Delhi, Haryana and Karnataka have shown the maximum increase in new cases on a week on week basis.

Maharashtra alone accounted for a weekly increase of 16,012 cases.

The Centre is continuously engaging with the states and union territories reporting higher caseload of active cases and those reporting a spike in the daily new COVID-19 cases, the ministry said.

States and UTs have been advised to maintain a continued rigorous vigil for containing the spread of COVID-19 so that the gains of collective efforts are not squandered away, the ministry said.

The central government has also rushed high-level teams to Maharashtra, Kerala, Chhattisgarh, Madhya Pradesh, Gujarat, Punjab, Karnataka, Tamil Nadu, West Bengal, and Jammu and Kashmir to support them in their fight against the recent spike in COVID-19 cases. The three-member teams are headed by joint secretary-level officers in the Health Ministry.

They will ascertain reasons for the surge and coordinate with the state health departments in COVID-19 control and containment measures.

The next phase of Covid-19 vaccination commenced from March 1 for those who are over 60 years of age and for people aged 45 and above with specified co-morbid conditions.

More than 1.08 crore people have recovered from the disease so far. As many as 13,123 patients have recovered and got discharged in the last 24 hours.

Maharashtra has reported the maximum number of single-day recoveries with 6,332 newly recovered cases. As many as 3,512 people recovered in Kerala in the past 24 hours, followed by 473 in Tamil Nadu.