Crime against Dalits rising in UP : Priyanka 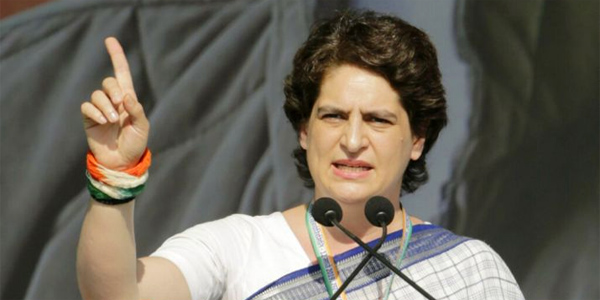 Congress leader Priyanka Gandhi Vadra on Wednesday alleged that incidents of persecution and killing of Dalits were on the rise in Uttar Pradesh, and demanded that the Yogi Adityanath government should stop "ignoring" them and take action.

The Congress has been alleging that the law and order situation is deteriorating in Uttar Pradesh under the BJP rule, a charge denied by the state dispensation."Incidents of persecution and killing of Dalits are rising in UP.

"Mahoba, Agra, Gorakhpur, Rae Bareli, Hardoi," she alleged, listing the places from where such incidents have been reported. Will the BJP government bother to explain why the incidents of persecution of Dalits are not stopping in the state, the Congress general secretary asked.

"The state government should stop ignoring these incidents, take action and answer," she said in a tweet in Hindi. The Congress leader has been vehemently criticising the Adityanath government over the law and order situation in the state.She had earlier said that that the speed of crime is twice the speed of governance in Uttar Pradesh.

Earlier on Tuesday, Bahujan Samaj Party chief Mayawati accused the Uttar Pradesh government that law and order in the state have worsened and that persistent atrocities and injustice against Dalits is a matter of concern. "In the BJP government of UP, people of the same society are suffering from all kinds of atrocities, but the incessant incidents of injustice and atrocities against Dalits are a matter of extreme concern. The death of a Dalit youth in police brutality in Rae Bareli and the killing of three Dalits in Agra, etc. are extremely sad and very condemnable”, she tweeted.

"Regarding these latest incidents of UP, the government should take prompt action against the culprits in strict legal sections and ensure the safety of the people especially the weaker sections”, this demand of BSP. Such painful incidents on the day of the state prove to be Jungle Raj here. Mayawati has also mentioned incidents in her tweet.