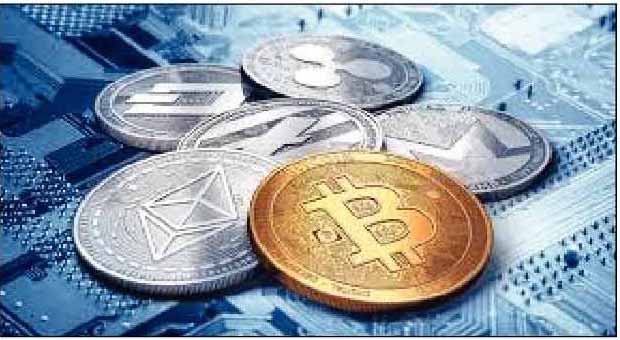 Bhopal: Bhopal STF has arrested Rupinder Pal Singh Chhabra, who cheated Rs.2 crore in Jabalpur in the name of cryptocurrency. Shocking revelations are coming from Chhabra who has been arrested. The accused and his gang have cheated 8 thousand people in 26 countries after learning the skill of cheating from some foreign people. Apart from Jabalpur, the gang had built its network in many cities including Bhopal, Raipur, Mumbai, Chandigarh, Delhi, Jalandhar, Amritsar and Delhi. The accused used to pay a commission of up to 30% for making a member.
Rupinder Singh Chhabra, who was caught by the STF, has also confirmed the disclosures of the earlier accused. Between 2017 and 2019, this gang had cheated 8 thousand 372 people living in 26 small and big countries including Hong Kong, China, Dubai, Malaysia, Sri Lanka, Nepal, Bhutan besides India. Of this, 70% were NRIs. Everyone was lured into making huge profits by luring them to invest in the cryptocurrency PGUC (Plus Gold Union Coin). He had invested this amount in land, house, shop, Mujra Night, Bollywood Heights, Casino in Goa, AP-3 Motion Pictures Production, Mehfil-e-Umrao Jaan etc.

Used to do business like this
The accused Rupinder Pal Singh Chhabra, resident of Madanmahal, Jabalpur, used to do business on the lines of multilevel marketing. The gang included Rajeev Sharma, a resident of Bhopal, Brajesh Rakwar, a resident of Jabalpur Shakti Nagar, his wife Seema, Vineet Yadav and Rupesh Rai, a resident of Worli, Mumbai. The gang was running this fraud business in association with Kevin living in Hong Kong and Daniel Francis living in Malaysia. The accused had created a website named PGUC (Plus, Gold Union Coin) giving Indian form to cryptocurrencies under the guise of international trade.

Gang was exposed on June 2019
This gang, which had committed fraud in the name of cryptocurrency, was exposed by the STF in June 2019. Then during the interrogation of the arrested accused, it was revealed that the kingpin is Rupesh Rai, a resident of Worli Mumbai. Rai is a hotel and real estate businessman. The Rakwar couple was handling work from Delhi. At the same time, Rupinder Pal Singh Chhabra, a resident of Jabalpur Madan Mahal, was made the head of Chhattisgarh including Jabalpur. Chhabra had a business of real estate, hotel and event management, while Rajeev Sharma of Bhopal used to woo investors from there. This gang has cheated more than 100 crores.

There were many shocking revelations
The gang's kingpin Rupesh Rai was a 10th pass diploma holder and an air conditioner technician but the accused created a fake Hong Kong stock market website in India to cheat by investing in cryptocurrencies. Its server was installed in Jaipur. This website looked exactly like the stock market of Hong Kong. People were confused and started investing in cryptocurrencies by understanding the stock market of Hong Kong.

Gang used to hold big parties for cheating
To woo the investors, meetings and big parties were organized by the accused in cities like Mumbai, Delhi, Chandigarh, Bhopal, Raipur, Jalandhar, Amritsar. But this business was also affected when the prices of virtual currency fell sharply in 2017-18. In December 2017, when the Sea Sex Exchange was shut down, Brajesh-Rupesh and his associates started PGUC (Plus Gold Union Coin), which had a server in Jaipur. He used to run business from there.

More than 100 victims identified
The accused used to lure people to invest through cryptocurrencies that they would get 20 to 30 per cent profit every month. The accused used to get people to invest up to Rs 3-15 lakh. They lured the investor to make chain of investors and used to pay commission of up to 30 per cent on bringing in new investors. On June 26, 2019, the accused in this case were first arrested including Brajesh, his wife Seema, Vineet then Rajiv Sharma and others. Rupesh Roy himself surrendered on 8 September 2019. But Rupinder Pal Singh Chhabra, a resident of Jabalpur Madan Mahal, was absconding. A reward of Rs 10,000 was announced for his arrest.

This is how it was revealed
After the fall in cryptocurrencies, when investors started asking for money back, Rupinder Pal Singh Chhabra in Jabalpur, and Rajiv Sharma in Bhopal complained to STF in 2018. In both the cases, complaint was made against Jabalpur Shaktinagar resident Brajesh Raikwar, his wife Seema and Rupesh Rai and Chhabra and Sharma claimed they were victim. Rupinder had made investments of two and a half crore rupees from acquaintances and close friends in Jabalpur. The STF went ahead with the investigation in the case and on 26 June 2019, the Rakwar couple was arrested in Jabalpur when they returned from Dubai. The cunningness of of Chhabra and Rajeev Sharma was then exposed. Later they were also made a accused. Then four crore rupees were found in the account of Brajesh's wife.

What is cryptocurrency
Cryptocurrency is one such currency. Which is built on computer algorithm. It is a free currency, which has no owner. This currency is not under the control of any one authority. Usually, like rupee, dollar, euro or other currencies, this currency is not operated by any state, country, institution or government. It is a digital currency, for which cryptography is used. Usually it is used to buy goods or services.