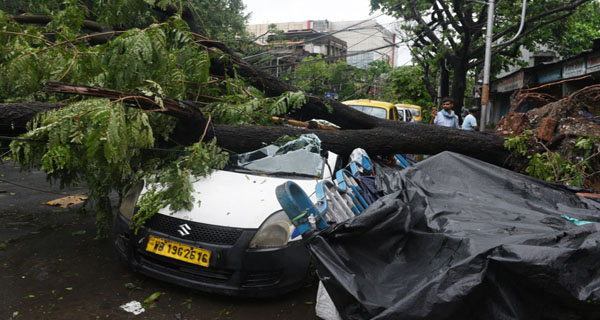 West Bengal Chief Minister Mamata Banerjee on Thursday said at least 72 people have died in the state due to extremely severe cyclonic storm ‘Amphan’ Ms Banerjee said most of them died due to uprooting of trees and electrocution. Fifteen of the 72, who died were from Kolkata. Urging Prime Minister Narendra Modi to visit the state to review the situation,

Ms Banerjee said during a video press conference, “Till now, 72 people have died due to cyclone Amphan. I have asked the PM to visit Sunderbans. In this hour or crisis, let us work together... Amit Shah called me this afternoon and assured the centre will extend full help,” the Chief Minister said.

The Prime Minister said the entire nation stands with Bengal and “no stone will be left unturned” to help those affected. “In this challenging hour, the entire nation stands in solidarity with West Bengal. Praying for the well-being of the people of the state. Efforts are on to ensure normalcy,” the PM tweeted. Ms Banerjee announced a compensation of Rs 2.5 lakhs for those affected. “I announce a compensation of Rs 2.5 lakh each to the families of those who died in the cyclone,” the chief minister said. “I have never seen such a disaster before. I will ask PM to visit the state and see the situation,” she said.

The chief minister said the damage caused by Amphan is more than the coronavirus pandemic “On one hand we are fighting with COVID-19, on the other hand lakhs of migrants are coming back,” she said. “Over all this now the cyclone. I think that this is a disaster bigger than COVID-19. I would request [the Centre] please forget politics and cooperate with us and save the people,” Ms Banerjee said. “Cyclone Amphan has left a trail of devastation beyond our thoughts. While the material damage is substantial, Bengal stands united in this time of crisis.

Together we will overcome this because nothing can dampen the spirit and strength of the people of Bengal,” the chief minister said, “Area after area has been devastated. Communications are disrupted,” Ms Banerjee added that though five lakh people have been evacuated, state authorities had not entirely anticipated the ferocity of the cyclone. West Bengal Governor Jagdeep Dhankhar in a tweet message said, “State has suffered one of the worst disasters in recent times as Cyclone #Amphan has left behind a trail of destruction and human woes and misery.” NDRF Chief SN Pradhan said a team of Union home ministry will visit the states to evaluate the damages done by cyclone Amphan.

The number of deaths and injuries may rise in West Bengal, he said. “NDRF teams are operational. We will continue to provide services till states (Odisha & West Bengal) require services that are expected to be required for a longer time in West Bengal,” Mr Pradhan said. He said the Union Cabinet Secretary held a meeting with the West Bengal and Odisha Chief Secretaries to estimate the damage and response, earlier today.

Normalcy will return in the next 24 to 48 hours in Odisha. “Roads clearance process has picked up pace and has been completed in some localities. It’ll take some time to restore electricity and telecom services in affected areas which will need assistance of technicians and gangmen and we’re ready to help them wherever required, Mr Pradhan added. Around 5 lakh people evacuated in West Bengal have been told to remain in shelters; more than 2 lakh people in Odisha were evacuated, since situation is under control and weather has moderated in Odisha, some people have started returning to their homes, “ said the NDRF chief.