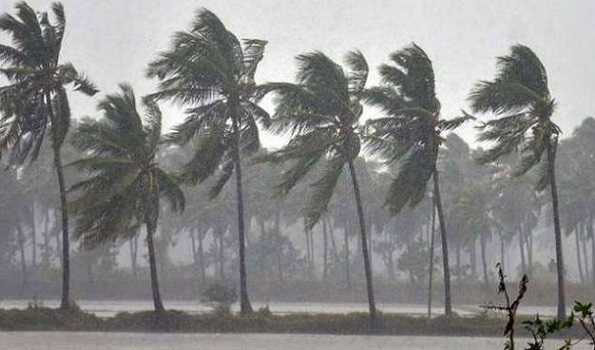 A bulletin issued by the Met office on Tuesday saidit is very likely to intensify further into a severecyclonic storm during the next 24 hours, move west-northwestwards for next 12 hours and then northwestwards.It is very likely to cross Tamil Nadu and Puducherrycoasts between Karaikal and Mamallapuram, about55 km from here, around Puducherry on Wednesdayevening as a severe cyclonic storm with a wind speedof 100 to 110 kmph and gusting to 120 kmph.

It was followed by Nungambakkam and MGR Nagar(8 cms).

He said several many places in coastal districts anda few interior places would receive moderate rainstill tomorrow morning.
When the cyclonic storm was expected to make a landfalltomorrow evening, coastal areas would get widespreadrains and many places in interior districts would getmoderate rains.Rains would continue over Chennai and it would be withheavy to very heavy intensity in one or two areas.

Mr Balachandran said one or two places in Karaikal,Nagapattinam and Mayiladuthurai would be receivingextremely heavy rains of more than 24.4 cm tillWednesday morning.
Likewise, one or two places in eight districts suchas Tiruvallur, Chennai, Kancheepuram, Chengalpet,Villupuram, Cuddalore, Thanjavur and Tiruvarur wouldget heavy to very heavy rains upto 25 cms.
While isolated heavy to very heavy rains were expectedin north coastal districts on Wednesday, the intensityof the rainfall would be extremely heavy in one or twoareas in Puducherry, Cuddalore, Mayiladuthurai, Ariyalur,Kallakurichi, Perambalur, Villupuram and Tiruvannamalaidistricts tomorrow.

Squally winds with wind speed ranging from 100-110 kmphand gusting up to 120 kmph was likely in Nagapattinam,Karaikal, Puducherry, Mayiladuthurai, Cuddalore,Villupuram and Chengalpet when the cyclone moves closeto the coast tomorrow.
In Tiruvarur, Kancheepuram, Chennai and Tiruvallur,squally winds may prevail at a speed of 80-90 km,sometimes gusting up to 100 kmph from Wednesdayforenoon to night, he said.