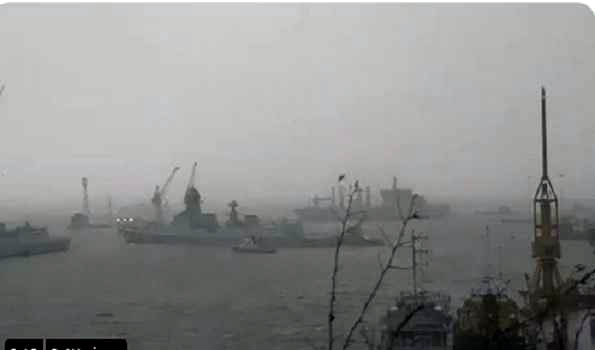 New Delhi, May 17 (UNI) The Indian Navy on Monday has deployed INS Kochi for Search and Rescue Operation to assist 273 ONGC personnel at Bombay High areas wherein a barge carrying these people adrift off of Heera Oil fields.

“On receipt of a request for assistance for a Barge 'P305' adrift off Heera Oil Fields in Bombay High area with 273 personnel onboard, INS Kochi was swiftly sailed with despatch for Search and Rescue (SAR) assistance whereas INS Talwar is also preparing to sail out”, the Navy spokesperson said.

Several other ships and aircraft have also been readied for High Availability Disaster Recovery (HADR) tasking in the wake of Cyclone Tauktae, he further said.

These Oil fields are around 70 km southwest of Mumbai and the naval ship is expected to reach near Heera oil field around 1600 hrs.

On Monday itself, the Indian Navy rescued four stranded crew members of an Indian cargo ship 'Coromondel Supporter XI' which was adrift North West of Mangalore in Karnataka in Arabian Sea.

The rough seas, due to cyclone Tauktae, had resulted in flooding of the vessel’s machinery compartments rendering it without propulsion and power supply, and the crew without any support, it said in a statement today.